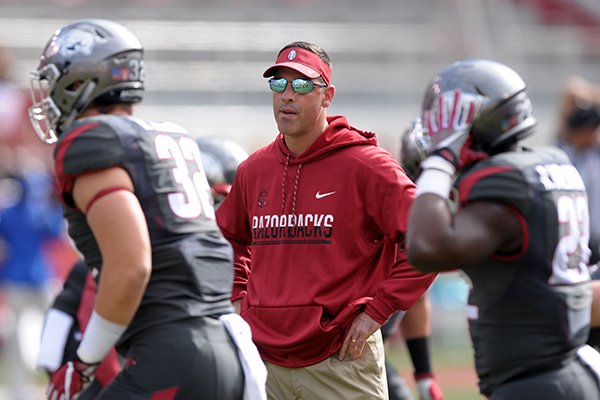 Arkansas offensive coordinator Dan Enos watches warmups prior to a game against Florida on Saturday, Nov. 5, 2016, in Fayetteville.

FAYETTEVILLE — Arkansas offensive coordinator Dan Enos has received a raise to $800,000 for 2017 and a contract extension with automatic salary escalators for the next two seasons.

Enos, 48, signed the amendment to his contract, which the Arkansas Democrat-Gazette received through a public records request, on Jan. 5.

Enos’ salary had originally been scheduled to increase to $750,000, a raise of $50,000, on Jan. 1. He had reportedly drawn interest from at least one other school and possibly NFL teams.

With new starters in quarterback Austin Allen and tailback Rawleigh Williams, as well as three new starters on the offensive line in 2016, the Razorbacks ranked No. 54 in total offense with 428.4 yards per game and No. 57 in scoring with 30.3 point per game.

Enos inherited a veteran offense in his first season as offensive coordinator in 2015, including quarterback Brandon Allen, tailback Alex Collins, tight end Hunter Henry and key linemen Sebastian Tretola, Denver Kirkland, Dan Skipper and Frank Ragnow. The 2015 Razorbacks ranked No. 29 in total offense (465.5 yards per game) and No. 27 in scoring (35.9 points per game).

Also, the University of Arkansas agreed to waive the $250,000 buyout owed by defensive coordinator Robb Smith according to documents obtained by the Arkansas Democrat-Gazette through a public records request. Smith resigned to take the same position at Minnesota and Coach Bret Bielema promoted Paul Rhoads to defensive coordinator on Monday. Terms of Rhoads’ new contract are not yet available.

In the letter, sent from his iPhone, Smith cited philosophical differences with Bielema as a reason for his departure.

Smith wrote, in part, “In reviewing this season we obviously didn’t meet our internal expectations on defense. To be perfectly clear, as defensive coordinator I take full responsibility for the results of the defense. In discussing solutions with Coach Bielema it has become clear we have philosophical differences on how to get better results.

“Given our differences, it seems in the best interest of everyone involved that I move on. I am grateful to Coach B for the opportunity he gave me and on behalf of my family want to say thanks to the many Rrazorback fans that supported and befriended us along the way.”

In other Arkansas coaching news, strength and conditioning coach Ben Herbert has received a two-year extension through June 30, 2020.

Herbert, tight ends coach Barry Lunney Jr. and receivers coach Michael Smith have been on Bielema’s staff through each of his four seasons.