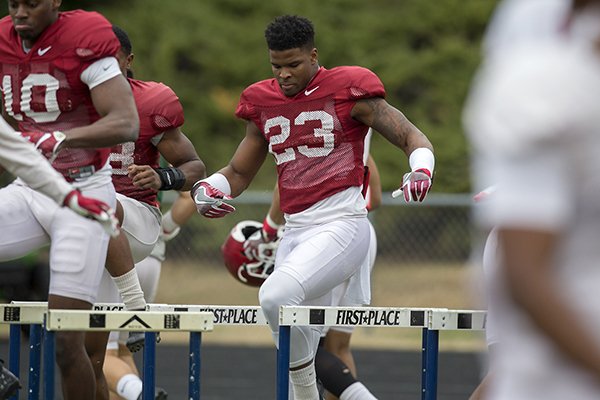 FAYETTEVILLE — Arkansas linebacker Dre Greenlaw underwent successful surgery on Wednesday to repair a bone in his right foot, according to his mother.

The work was performed by renowned orthopedist Dr. Robert Anderson in Charlotte, N.C., where Greenlaw re-injured his foot in the Belk Bowl.

Greenlaw’s mother, Nanci Early, posted updates about the operation on social media, writing that Greenlaw had a bone graft taken from his hip and inserted to stabilize his troublesome foot.

Greenlaw missed the final six games of the regular season after suffering a different injury on the same foot in the first quarter of Arkansas’ 49-30 loss to Alabama on Oct. 8. After about 10 weeks of recovery, Greenlaw resumed practicing in December as Arkansas prepared for the Belk Bowl. He re-injured the foot during Arkansas’ 35-24 loss to Virginia Tech in Charlotte, N.C., Early wrote.

The junior linebacker from Fayetteville now faces another 10-week recovery period, which would end during the second week of spring drills for the Razorbacks.

Arkansas Coach Bret Bielema said on Saturday that the Razorbacks were researching different medical options to “cover all our bases to get him the best possible results.”