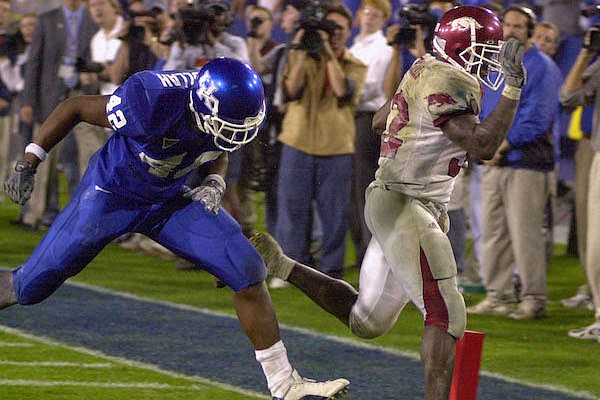 FAYETTEVILLE — After Kentucky overcame a 14-point deficit in the second half against the Arkansas Razorbacks to force overtime at Commonwealth Stadium on Nov. 1, 2003, the Wildcats should have had the momentum.

But what Kentucky’s players, coaches and fans didn’t realize was that the Razorbacks had the Wildcats right where they wanted them.

Why This Game Matters

Arkansas tied the NCAA record — which the Razorbacks set two seasons earlier in a 58-56 victory at Ole Miss — by winning at Kentucky in seven overtimes.

“By that Kentucky game, most of us had been through those long overtimes and knew what it was going to take to push through and win,” said DeCori Birmingham, a flanker and running back for the University of Arkansas, Fayetteville from 2001-04. “It was one of those deals where we felt like, ‘If we can get you into overtime, we know what’s going to happen.’

“It became second nature for us. We didn’t sweat it when the game went into overtime.”

Arkansas beat Kentucky 71-63 in an NCAA record-tying seven overtimes after the game had been tied 24-24 at the end of the fourth quarter.

The Wildcats played five more overtimes against Arkansas than they had in total going into the game.

Kentucky’s only previous games to go beyond regulation lasted one overtime in a 40-34 victory over Alabama in 1997 and 40-34 loss to Louisville in 2000.

The Razorbacks, by contrast, came into the Kentucky game having played 15 overtime periods since 2001— the season they won 58-56 in seven overtimes at Ole Miss to set an NCAA record.

“Once we got to overtime, we just felt like we had the advantage because we had been there so much before,” said Houston Nutt, the Razorbacks’ coach from 1998-2007. “We were in great condition and we knew how to finish.

“There weren’t too many we didn’t win in overtime.”

Nutt’s Arkansas teams went 6-1 in overtime games, including 3-1 with Matt Jones at quarterback.

Jones came off the bench at Kentucky — just as he had at Ole Miss two years earlier — to lead the Razorbacks to victory.

In overtime periods against the Wildcats, Jones threw touchdown passes to Jason Peters and George Wilson, ran for a touchdown and hit Peters and Wilson with two-point conversion passes.

“Matt was so good,” Nutt said. “You loved that he had ice water in his veins. He didn’t feel any pressure.

“He was always faster than you thought. They’d take bad angles to try and tackle him.

“Most of the time, defensive coordinators would approach me after a game and say, ‘I didn’t know Matt Jones was that fast by film study.’ Everybody said that.

“If they did catch him, they had a hard time getting him down.”

It was the most points the Razorbacks had scored since a 73-0 victory over Rhodes College of Memphis in 1928.

“Nobody likes to be on the losing end of an NCAA record,” Kentucky Coach Rich Brooks said after the game. “It’s just a tough one to lose.

“I’m proud of the effort. We played some great football, but in the end, we had several chances to get it done and they came back and got it.”

Birmingham rushed 40 times for 196 yards and two touchdowns, including a 25-yard run that along with Jones’ two-point pass to Peters put Arkansas ahead 71-63 in the seventh overtime.

Kentucky moved to the Razorbacks 5 on its possession in the seventh overtime, but quarterback Jared Lorenzen — running out of the Shotgun formation — fumbled on fourth-and-3 and Arkansas outside linebacker Tony Bua recovered the loose ball.

“As Lorenzen was falling down, he knew he wasn’t going to make the first down, so he stretched his hand out with the ball and he lost it,” said Bua, who owns a roofing business in Lucas, Texas. “When I first saw it happening, I wanted to start jumping up and down and celebrate, because I knew you can’t advance a fumble forward in that situation.

“But then I was like, ‘You’ve got to jump on this ball just to make sure.’ I cradled the ball and was going to run around. But as I went to stand up, I was so tired, I said, ‘Forget that.’

“So I just got up and walked off the field.”

Lorenzen, a left-handed thrower listed at 6-4 and 260 pounds, had nicknames that included the “Hefty Lefty” and “Pillsbury Throwboy.” He completed 28 of 49 passes for 326 yards and 2 touchdowns and rushed 15 times for 39 yards and 3 touchdowns.

“I don’t know if I can feel anything right now,” Lorenzen said after the game. “It was such an emotional roller-coaster — scoring, getting scored on. It was amazing.”

Nutt, who works for CBS Sports, said the game was “a shootout” with Jones and Lorenzen dueling.

“Jared came back after a tough start and made a lot of huge plays, just like Jones,” Brooks said. “Those two quarterbacks just kept making plays and keeping their teams alive.”

Birmingham, who is now a Texas State trooper, said the Razorbacks worked on overtime situations a lot in practice.

“We put a lot of emphasis on short-yardage plays and two-point conversions,” Birmingham said. “So by the time we got to the Kentucky game, we knew exactly what we were going to do.”

Ryan Sorhan started at quarterback for Arkansas after Jones was limited in practice during the week because of a sore shoulder.

Jones played receiver the first four series and served as a decoy, but took over at quarterback with the game tied 7-7.

“He came up with throw after throw, stayed alive in the pocket and, most important, stayed poised,” Arkansas quarterbacks coach Roy Wittke said after the game. “He just made play after play.”

Jones said after the game he wasn’t distracted by criticism resulting from the Razorbacks going 0-3 in October with losses to Auburn, Florida and Ole Miss after a 4-0 start that included road victories over Texas and Alabama.

“It doesn’t matter to me what people say,” Jones said. “My life is not directed around football. You can say what you want about me.

“People have their opinions, and that’s fine. I don’t pay attention to any of that. I only listen to the people around me that I know love and care about me.”

While Kentucky had an open date the next week to recuperate from playing a seven-overtime game, Arkansas had a quick turnaround with a game against South Carolina on Thursday night.

The Razorbacks still took care of business and beat the Gamecocks 28-6 in Little Rock.

Winning at Kentucky ended the Razorbacks’ three-game losing streak and was part of a 5-1 season-ending stretch for Arkansas, which beat Missouri 27-14 in the Independence Bowl to finish 9-4.

The Razorbacks gained 605 yards in total offense against Kentucky and their 47 points in overtime broke their NCAA record of 41 set at Ole Miss in 2001. The Wildcats gained 506 yards in a game that lasted 4 hours and 56 minutes.

Arkansas and Kentucky combined 86 points in overtime broke the NCAA record of 80 set by Arkansas and Ole Miss.

“One thing is, the fans got their money’s worth,” Brooks said. “The bad news is, the home team lost.

“I never thought I’d be in a game like that.”

For the Razorbacks, it was just like old times.