Playback, payback: Stoerner gets ‘gorilla’ off his back 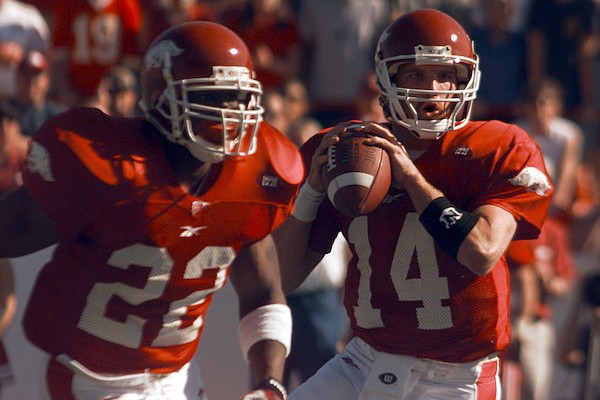 FAYETTEVILLE — The Arkansas Razorbacks knew they owed Tennessee when the Vols came to visit on Nov. 13, 1999.

“It’s like having a cousin that punched you and he lives out of town,” said Kenoy Kennedy, a two-time All-SEC free safety for the Razorbacks and a senior in 1999. “But you know he’s got to come back to grandma’s house next year, so you’re waiting to get him back.

Why This Game Matters

Arkansas avenged a bitter 28-24 loss at No. 1 Tennessee the previous season by beating the No. 3 Vols by the same score at home. The victory helped the Razorbacks earn a Cotton Bowl bid.

Tennessee had delivered a punch in the gut to the Razorbacks a year earlier when the No. 1 Vols rallied to win 28-24 at Neyland Stadium by scoring a touchdown with 28 seconds left after quarterback Clint Stoerner lost a fumble.

Adding to the Razorbacks’ agony was that the University of Arkansas, Fayetteville was 8-0 and ranked No. 10 going into the Tennessee game.

The Vols went on to finish 13-0 and beat Florida State in the Fiesta Bowl to win the national championship.

“When you go into the season, there’s always one or two games you know are going to be the biggest,” said Anthony Lucas, a senior wide receiver for the Razorbacks in 1999. “We definitely had that Tennessee game circled on our schedule.

“We were ready and we couldn’t wait to play them again. Everybody was so focused.”

It wasn’t only the players who were hungry for payback.

“The whole week on campus students came up to you and said, ‘This is the week. We owe ‘em,’ ” Kennedy said. “We were saying the same thing in the locker room.

“Our attitude was, ‘We’ve got to make this happen. We owe it to the state and we owe it to ourselves and the fans. We owe it to everybody that’s ever been through the University of Arkansas.’

“I think everybody took it upon themselves to make sure we were prepared to leave it all on the field. If you’re not exhausted and beat up after this game, shame on you.”

Stoerner, a senior in 1999, was especially anxious about getting another shot at Tennessee.

“Very rarely in my career did a game mean something personally to me,” said Stoerner, who is now analyst for the SEC Network. “I never played the game for me.

“It was always about the ability to get 11 guys on the same page and score points and not turn the ball over and play well.

“But when we played Tennessee in ‘99 I remember feeling a lot more pressure personally than any other game. Before that game, I distinctly remember thinking, ‘I’ve got to get this monkey — a gorilla, really — off my back.’ “

On Arkansas’ first offensive play Stoerner passed to Lucas for a 7-yard gain.

“Anthony is 6-4 and could jump out of the gym,” Stoerner said. “He jumped up and caught the ball, as he did a lot of times, but I almost missed him because I was so nervous.”

Stoerner and Lucas connected five other times in the game, the last of which lifted Arkansas to a 28-24 victory and knocked the No. 3 Vols out of a shot to win a second consecutive national championship.

“We’d been hitting the hitches, the curls, the comebacks,” said Houston Nutt, the Razorbacks’ coach from 1998-2007. “I said, ‘It’s time to go deep again. We’re going to protect this thing with play-action and it’s going to be a touchdown.’

“Anthony really knew how to beat the cushion of a defender and set it up just right, and Clint put the ball in there perfect.”

Lucas, an assistant coach for Pulaski Academy, beat cornerback Dwayne Goodrich on a post route and hauled in Stoerner’s pass for a 23-yard touchdown play that put the Razorbacks ahead 28-24 with 3:24 left in the fourth quarter.

“I wanted the ball in my hands at that time,” Lucas said. “I knew if it came to me, I had to make the catch.

“We had just hit them with that a couple plays before with Emmanuel Smith catching a pass across the middle.

“Then Coach called it again, and Clint pumped the ball to Emmanuel and that brought the safety down. I came behind Emmanuel and I beat my guy and Clint’s throw was right on the money.”

The touchdown capped an eight-play, 80-yard drive, but the Razorbacks still had to stop the Vols.

Senior quarterback Tee Martin drove Tennessee to the Arkansas 17, but he threw incompletions on third and fourth downs and the Razorbacks ran out the final 1:23.

“Our defense made a great stand, but I was nervous all the way to the end until we took a knee on that last snap,” Nutt said. “You just wanted to get out of there with the win so badly.”

Kennedy ran to the sideline and embraced Stoerner after Martin’s incompletion on fourth-and-6.

“We hugged in the middle of the field like we were long lost brothers,” said Kennedy, who led the Razorbacks with 14 tackles. “I remember that like it was yesterday.

Tennessee linebacker Raynoch Thompson said there was nothing lucky about the Razorbacks’ victory.

“People are always saying that ‘lucky’ word, but they don’t know the definition of word,” Thompson said. “Luck is taking advantage of the opportunity when it presents itself. And they took advantage of all the opportunities they had.

“I credit Arkansas. It has been a long time since I’ve seen a performance like that.”

The teams arrived at the game headed in different directions.

But the Razorbacks were motivated by the resulting criticism of their lopsided loss to the Rebels that included a 31-3 halftime deficit.

“I love this school,” Arkansas defensive coordinator Keith Burns, who played for the Razorbacks, said after the Tennessee game. “When you get taken shots at and the school means so much to you, it hurts. I just wanted to get the guys ready to play as well as they could.

“I told the guys all week long, when ESPN rolls the highlights of the top 25, you’ve got a chance to let the whole nation know how good you are.”

Nutt rallied his team with an upbeat attitude during the week, told the Razorbacks not to dwell on the Ole Miss game and had lighter practices in sweats rather than full pads.

Several Razorbacks said the practice schedule helped freshen them up.

“Everybody on our team played their guts out,” Nutt said after the game. “I loved the effort. Our kids never quit on us.

“We were giant killers today. For two hours and 30 minutes, we were the better team.”

“Our kids respect Arkansas and we prepared well, but I think they emotionally and physically whipped us,” Fulmer said. “Whoever has the most heart wins the game.

“They outcoached us and outplayed us. My hat is off to their staff, their players and their fans.”

Fans flooded the field when the game ended, tore down the goal posts and took them to Dickson Street, where the celebration lasted into the wee hours of Sunday morning.

After things had calmed down a bit, Stoerner and Lucas were among the players who autographed the goal posts.

“I haven’t seen anything like it since,” Stoerner said of the celebration. “I don’t come to every game, but it would be hard to re-create the year-long buildup to that game.

“The same people that brought up the fumble all year were the same ones dancing on Dickson Street. That’s all part of it.”

Stoerner completed 18 of 28 passes for 228 yards and 2 touchdowns. Lucas had 6 receptions for 96 receptions and senior Boo Williams was 4 for 82. Freshman tailback Cedric Cobbs rushed 15 times for 107 yards.

Martin completed 22 of 44 passes for 311 yards, but the Razorbacks held tailback Travis Henry to 79 yards on 12 carries after he had rushed for 197 yards against them the previous season.

Arkansas took a 7-0 lead on cornerback senior David Barrett’s 43-yard interception return in the first quarter on a pass that bounced off the hands of running back Jamal Lewis, but the Vols were ahead 24-14 midway through the third quarter after touchdown runs by Lewis, Martin and Henry.

Stoerner hit Williams with a 53-yard touchdown pass with 6:02 left in the third quarter to pull the Razorbacks within 24-21 and set up the fourth-quarter drama.

“It was a redemption game,” Kennedy said. “We’d waited a whole year to get another shot at Tennessee.

“For us to beat them the way we did, by the same score they beat us, and for the game to come down to the end made it that much better.”

Tennessee free safety Deon Grant said the Razorbacks were fired up in pregame warmups and not shy about letting the Vols know about it.

Kennedy, who lives in Fourney, Texas, and manages real estate properties along with businesses for home care and general contracting, played eight seasons in the NFL with Denver and Detroit, but said he never enjoyed football more than when Arkansas beat Tennessee.

“I remember more of my college games than I do my NFL career,” Kennedy said. “People ask me all the time about playing in the NFL, and I tell them I’d trade my pro days for college days any day of the year.

Page 1A of the Arkansas Democrat-Gazette’s Sunday edition featured a photo of Stoerner kneeling in prayer after the game ended.

“I don’t mean to get all dramatic, but winning that game meant so much to me personally because of what my teammates meant to me,” Stoerner said. “The hardest thing about the ‘98 game was knowing I let down the players who had graduated and didn’t get a chance to come back with me the next year.