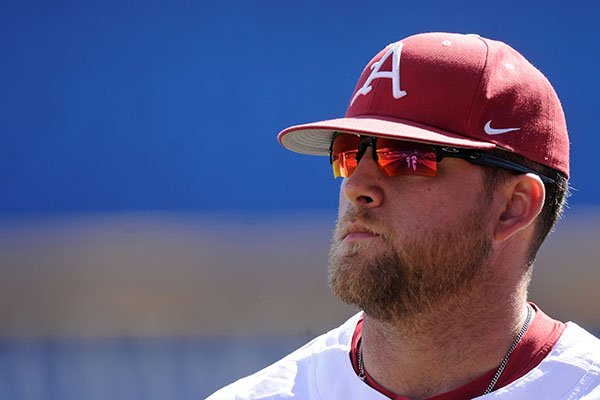 Arkansas volunteer coach Josh Elander watches warmups prior to a game against Mississippi State on Thursday, May 25, 2017, at the SEC Tournament in Hoover, Ala.

FAYETTEVILLE — Arkansas is losing its volunteer baseball coach to the Tennessee Volunteers.

Josh Elander will be hired at Tennessee "in some capacity," Volunteers coach Tony Vitello confirmed Wednesday. Elander spent the 2016-17 school year working as a volunteer for the Razorbacks and was credited with helping the team have a breakout season at the plate.

Last month, Arkansas coach Dave Van Horn said Elander would return for the 2018 season after making a two-year commitment to be the Razorbacks' volunteer.

Parry was a catcher at South Dakota State and Arkansas has traditionally used the volunteer position to work with catchers. Prior to his one season at Southern Arkansas, Parry was on the staff at Dallas Baptist where he worked with Wes Johnson, the Razorbacks' pitching coach.

Parry also has worked at Sacramento State and Miles Community College in his home state of Montana. He spent two seasons in the Pittsburgh Pirates' minor league system.