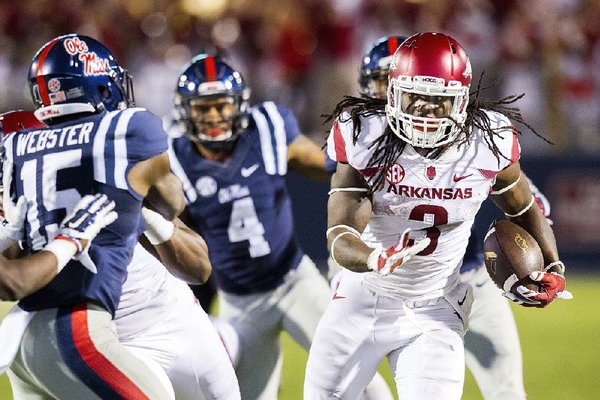 The Heavenly Heave or Henry Heave or Hunter Heave -- call it whatever you want -- on the afternoon of Nov. 7, 2015, in Oxford, Miss., was like a spiritual intervention.

The CBS-televised game easily could have been ranked higher than No. 5 in our series of most memorable games since Arkansas joined the SEC 25 years ago.

Twice it appeared Ole Miss had escaped and would move one step closer to a Western Division championship, but Hog heroics appeared in mammoth proportion.

Brandon Allen had tied the game with his sixth touchdown pass of the game with just 53 seconds to play, and the defense held to force overtime. Overtime generally favors the home team, unless that team is playing the Razorbacks.

The Rebels scored first on an 8-yard run by quarterback Chad Kelly, who ran for 3 touchdowns and 110 yards and passed for 368 yards and 3 more touchdowns.

Arkansas, starting at the Rebels 25, ended up going the wrong way. Allen had a rare incompletion, then the Hogs were hit with a 5-yard penalty for delay of game before Allen was sacked for a 10-yard loss. Another incomplete pass set up fourth and 25 at the Ole Miss 40.

A bomb could have gone off in Vaught-Hemingway Stadium and no one would have heard it. Victory seemed to be one snap away, and when Allen hit tight end Hunter Henry for 14 yards -- 11 short of the first down -- pandemonium poured through Oxford.

But Henry, at 6-6 and 255 pounds, was not coming down easy. As he started to topple, he intentionally fumbled the ball backward, heaving it in the direction of several Razorback jerseys.

The ball one-hoped into running back Alex Collins arms, who streaked to the 11 where he was gang-tackled. Not realizing he already had a first down, he fumbled, but wide receiver Dominique Reed recovered for the Hogs at the 11 for a first down. Two plays later, Allen passed for 9 yards to Drew Morgan for a touchdown, and the Razorbacks lined up to go for two and the victory.

More heroics, and luck, were whistling down Highway 72, and it was a whole Hog convoy.

Ole Miss came into that game looking to win the SEC West title. The University of Arkansas, Fayetteville was looking to get one game closer to bowl eligibility.

The Rebels had jumped from No. 15 in The Associated Press poll to No. 3 after beating Alabama 43-37 in Tuscaloosa. Despite later losing to Florida, the Rebs were 4-1 in SEC play.

Atlanta and the SEC Championship Game were in Ole Miss' grasp.

The Razorbacks were 4-4 overall and earlier had suffered a three-game losing streak.

That day, though, in overtime they trailed 52-51 when Allen rolled to his right on the two-point conversion but couldn't avoid Marquis Haynes, who got one big hand on him and took him down. The other hand was full of Allen's facemask, and in that moment before the yellow flag flew, the Ole Miss sideline was photographed in a premature celebration.

With another shot, offensive coordinator Dan Enos then called a play no one on the other side of the ball was expecting.

Allen took the snap and rolled right again, but this time he pulled up short, cut against the grain and dove into the end zone. The guy who had passed for 442 yards and six touchdowns had put the team on his back and used his legs and blocking to beat Ole Miss 53-52.

It was a game that will never be forgotten in Arkansas, and rarely mentioned in Mississippi. The Rebels would not lose another game and go to the Sugar Bowl, but it was Alabama -- thanks to the Hogs win -- who won the Western Division, the SEC championship and the national championship.