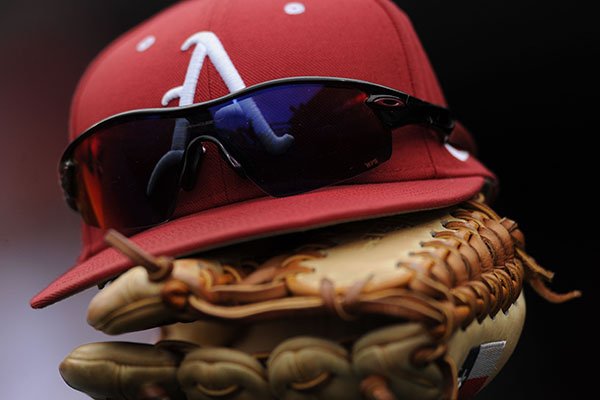 An Arkansas baseball hat and glove sit in the dugout prior to a game against Miami (Ohio) on Friday, Feb. 17, 2017, at Baum Stadium in Fayetteville.

FAYETTEVILLE — Arkansas received a commitment from a Cabot pitcher Wednesday to bring the Razorbacks' class of 2019 total to nine commits, including three from Arkansas.

"I've been an Arkansas fan all my life and grown up cheering and calling the Hogs," Morris said. "When I was told to call the pitching coach, I was shocked and it gave me a good feeling."

"It's pretty cool; you see on our team a bunch of ball players," Morris said. "You can tell they have potential. It's a good feeling to know we have those type of guys on our team."

Morris' fastball ranges from 85-87 mph. As a sophomore, Morris recorded a 3.39 ERA and 25 strikeouts in 20 2/3 innings for Cabot, which won the state championship in Arkansas' largest classification.

He was offered by Arkansas State and had received interest from Ole Miss and Kansas State.

PrepBaseballReport.com rates Morris the No. 6 player in Arkansas in the rising junior class. The Razorbacks have commitments from the state's top two recruits in the class, Springdale Har-Ber right-handed pitcher Blake Adams and Little Rock Christian catcher Cason Tollett.

Adams and Tollett play with Morris on the Arkansas Sticks travel team, which includes 11 players committed to SEC programs, including nine to the Razorbacks.