Razorback Report: Freshman LB not on 105 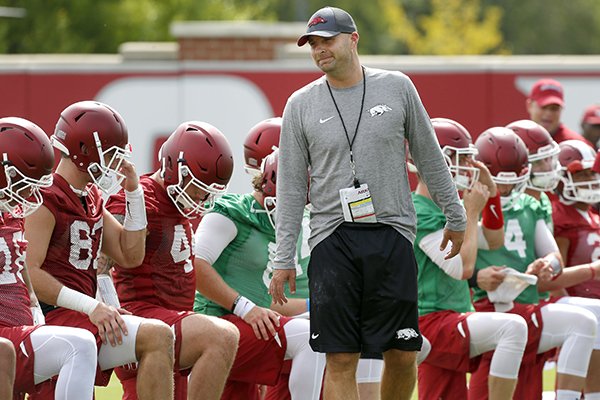 FAYETTEVILLE — Freshman linebacker Josh Paul is not on the 105-man roster for the Arkansas Razorbacks after going through the second summer session on campus Coach Bret Bielema said Thursday.

Bielema said he removed Paul in the last 24 hours before Thursday's start of training camp for the University of Arkansas, Fayetteville and put sophomore linebacker Terrell Collins in his place.

"He's fully qualified ... can join us at some point," Bielema said. "We just need him to focus on academics and just doing things a little bit better.

"Again, no issues, nothing ... other than the expectations in our program to do them a little bit better."

In another personnel move, redshirt freshman Dylan Hays from Little Rock Christian, has moved from the offensive line to defensive tackle. Hays, a 6-3, 298-pounder, took third-team reps at nose tackle behind Bijhon Jackson and Austin Capps.

"I've just been very, very impressed with him since he got here," Bielema said of Hays. "Just the tenacity he plays with, the effort, the energy.

"We're a little bit thin on the D-line, especially as we get closer to the center. It does two things. First, it gives us an opportunity to get Dylan on the field or the opportunity for him to show us that. And [it] also allow us to rep Jonathan Marshall a little bit at defensive end.

First-year Arkansas defensive coordinator Paul Rhoads was ranked No. 17 by Athlon Sports in its top 30 FBS coordinator hires in the offseason.

Arkansas' offensive and defensive linemen are wearing extra padding -- a webbed red cushion -- on the outside of their helmets.

Bret Bielema said the padding should help protect players who have frequent collisions in practice.

"If they don't want to wear them they can opt out of them, but we wold rather have them on them," Bielema said. "I watched Clemson practice in the spring last year and their entire O-line and D-line had those on. It's something that has continued to grow in the world of college football and I think it's something that is really positive."

"I literally have a daily dialogue with him," Bielema said. "He's taking a class that I believe finishes up next Friday. All of the qualifying test scores and everything are in, so it's literally waiting for this class to get done. It'll be about how fast it turns around."

Bielema said the earliest Brown probably will be able to practice is mid-August.

"That probably stems more out of just trying to get our better players on the field," Bret Bielema said. "He likes the right side a lot better than the left, and he likes guard a little bit more.

"The thing about Jalen, he's in the third year of our program, but he really only had I believe two years of high school football overall, so he's still a young player.

"I get excited about him. He does a lot of really good things. We've just got to get him to buy in full scale."

In Athlon Sports' preseason rankings of all 130 FBS teams, Arkansas was at No. 29, which was seventh among SEC teams.