No fret for Bret: Coach detects pleasing bounce in step of Hogs as practice begins 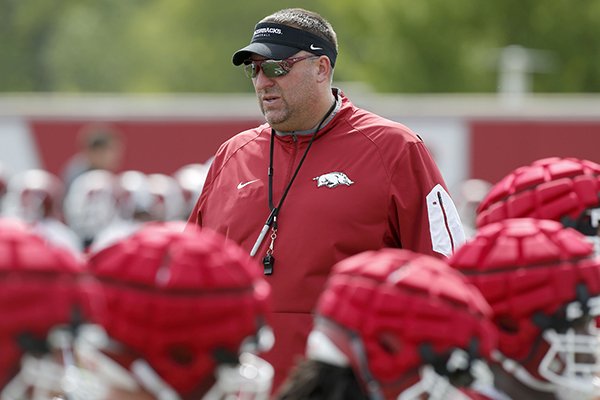 FAYETTEVILLE -- Bret Bielema gave a thumbs up to the Arkansas Razorbacks' first football practice of training camp on Thursday, a 2½-hour workout in helmets and shorts in temperatures that reached the high 80s.

"Obviously, the first day they're flying around with good tempo," Bielema said. "We caught a little bit of a break on the front end. ... It was cooler than we expected and our guys handled the weather pretty good."

The University of Arkansas, Fayetteville opened camp earlier this season for several reasons.

Not only are the Razorbacks scheduled to begin the season two days before most of college football, but NCAA legislation outlawing two-a-day practices with contact work has increased the time needed to get in the full allotment of 29 practices.

Arkansas' season opener is on Aug. 31 against Florida A&M of the FCS at War Memorial Stadium in Little Rock.

Bielema said the veteran players and starting units had very few errors and were "locked in" while the second team presented a "mixed bag" of results.

The Razorbacks had very few ball security problems with their older players, but Bielema said there was a couple of center-quarterback exchange issues with younger players.

The first 20 minutes of the practice -- a couple of special teams periods and a couple of separated team run-through periods -- were open to the media on the Razorback practice fields connected to the Walker Pavilion.

Senior safety Josh Liddell had an interception during team periods, Bielema said, and tight end Cheyenne O'Grady was a standout.

"In year's past, I've had to yell at him a couple of times, so I think he did some good things and didn't stand out for the wrong reasons," Bielema said of O'Grady, a sophomore from Fayetteville.

"Him and Grayson Gunter ... are going to be a nice little complement to each other with Austin [Cantrell]."

Bielema also praised tight ends Will Gragg and Jeremy Patton, as well as running back David Williams, a graduate transfer from South Carolina.

"David Williams looks like he belongs in the SEC and can be a good player in our program," Bielema said.

Safety Santos Ramirez made a couple of good plays, Bielema said, and cornerback Ryan Pulley had a pass breakup.

Bielema said he had not heard the Razorbacks had been picked to finish fourth in the SEC West.

"That's news to me," he said. "Again, I love to read about things at the end of the year, not the start of the year. I've said that coming off a program that had won two straight championships and a team that came out of 3-9, so if you voted for us, I guess thanks, but it doesn't really matter."

Bielema said the way the schedule lays out, players staying healthy and getting big contributions from upperclassmen will all play a role in how the Razorbacks perform.

"I think it's about your seniors playing well," he said. "I think if there's one thing that I've learned in this profession, especially now in the SEC West, when your older players that you've trained and developed for 3 or 4 years to come in and play good football, when they play their best football of their career, we play well. There are some great examples of that since I've been here all over the place."

Arkansas will work in helmets again today in practice No. 2 of 29 before the start of school, then add light pads on Saturday.

"We won't scrimmage, but it'll be a significantly more physical practice, obviously," Bielema said. "We'll go hard Monday and Tuesday. Tuesday will be the first day in pads."

Bielema said Wednesday's practice would focus strongly on work for the developmental players, Thursday would be tailored more to the veterans, and Friday would be a relatively light day before the first major scrimmage on Aug. 5.