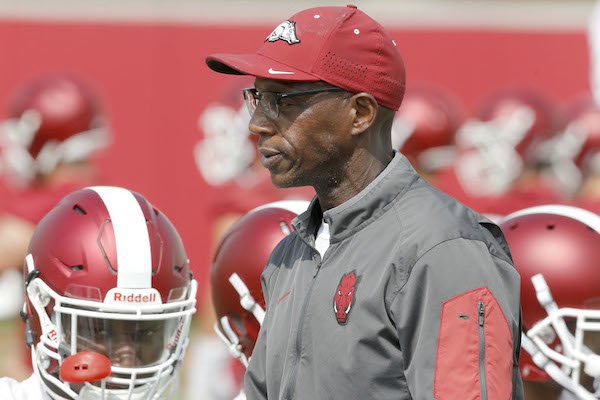 Arkansas Razorback running back coach Reggie Mitchell at the beginning of drills Friday, July 28, 2017, during practice on campus in Fayetteville.

David Williams hasn't been on campus for long, but he's already managed to make a positive impression on his new coaches and teammates.

The South Carolina graduate transfer running back became a key summer pick-up when he decided to make the move in late June, less than two months after All-SEC starter Rawleigh Williams retired from football following a second neck injury.

David Williams has impressed many within the program in two big ways. First, with his demeanor.

"He's earned the respect of guys very quickly by I think by keeping his mouth shut and listening and learning and then going out on the field and showing those guys he knows what to do, A," offensive coordinator Dan Enos said. "B, he's going to play with great effort."

"Just the way he gelled with the guys," quarterback Austin Allen said. "He didn't come in big-headed or anything like that. He's a down-to-earth guy where he's a guy you wanna go hang out with and be around him."

His ability to quickly pick up the playbook also jumped out to his new coaches and teammates.

"He's played a lot of football. He's learning our system, learning our terminology, but he's learning it on his own," Enos said. "It's very important to him and he's really fit in very well."

"How fast he's picked up the offense is just a testament to how hard a worker he is," Allen said.

David Williams' ran for 794 yards and 5 touchdowns in three seasons for the Gamecocks, including 239 yards and 3 scores while averaging 4.3 yards per carry as a junior last fall.

His decision to transfer to Arkansas bolstered a running back unit lacking experience after Rawleigh Williams' retirement and oft-injured Juan Day's decision to transfer. Sophomore Devwah Whaley became the feature back after running for 602 yards during a solid and at-times impressive freshman season, but true freshmen Maleek Williams and Chase Hayden were the only other two full-time scholarship running backs on the roster.

David Williams arrived in South Carolina as a highly rated recruit and left having not topped 300 yards in a season. But his playing experience and veteran presence could have value in the running back room.

"He's a fifth-year guy, so he's real mature," Allen said. "It's kind of like a business trip for him where he's got 6 months."

Enos said Maleek Williams and Hayden have been solid the first three days of fall camp, but pass protection is often challenging for inexperienced backs. That aspect of the game is apparently a strength for the 6-foot-1, 229-pound David Williams, even with picking up a new system.

"He's impressed our entire staff and team with just his patience running the ball, his ability to catch the ball out of the backfield and then his ability in obviously just a couple days to pick up blitzes," Enos said.