Returning receivers get earful on Day 1 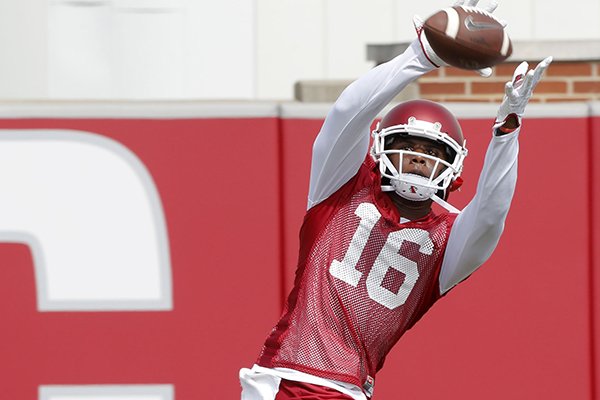 FAYETTEVILLE -- In college football, they call it de-recruiting.

De-recruiting customarily occurs when coaches in preseason drills deflate the head-swelling hot air pumped into freshmen that helped these same coaches persuade the recruits to sign on the dotted line.

But de-recruiting can happen to any athlete at any career stage.

The University of Arkansas, Fayetteville's upperclassmen receivers learned that Thursday. During Thursday's practice in helmets and no pads, the Razorbacks rookie receivers got pats on the back while the veteran wideouts absorbed a verbal kick in the pants.

The productivity of returning Razorbacks senior Jared Cornelius and 2016 senior receivers Drew Morgan, Keon Hatcher, Dominique Reed and Cody Hollister left the younger wide receivers mostly on the bench. The combined three catches Deon Stewart and La'Michael Pettway snared marked the only 2016 catches by an Arkansas wideout not in that group of five.

Cornelius missed time in the spring with a pulled hamstring, and now he is limited because of a sore back.

Coach Bret Bielema and his assistants went out of their way in spring to praise Stewart, Pettway, T.J. Hammonds -- the sophomore who moved from running back -- junior college transfers Brandon Martin and Jonathan Nance, and redshirt freshman Jordan Jones.

No doubt some of the praise was earned, but it didn't take Dr. Phil to note psychology at work to instill confidence in the unproven pass catchers.

Now is a different time at a different stage. Thursday's first preseason practice leads into the Razorbacks' Aug. 31 season-opener against Florida A&M in Little Rock.

Adding a fresh batch of receivers -- including freshmen Jarrod Barnes of Cabot; Maleek Barkley of Austin, Texas; Koilan Jackson of Joe T. Robinson; and De'Vion Warren of Monroe, La., to go along with Fordyce's Gary Cross, a transfer via Hutchinson (Kan.) Community College -- Bielema sent a post-practice message that no receiver other than Cornelius has earned anything.

"I tell you what I mean," Bielema said. "Some of these older receivers that haven't gotten on the field yet, they had better wake up and smell the coffee. Because if they don't perform right, those younger guys will go right by them. It doesn't take me long to figure out you've been here three years and you can't get it right, and you've got a guy who has been here three months and gets it right. We'll make a move in a hurry."

But by Tuesday and Wednesday when pads have been donned and their sore freshman legs are weary after veteran defensive backs whack and harass them, look for the rookie receivers to get an earful.

In college football, most everyone gets de-recruited eventually.

It's the game coaches play to get their best ready to play the game.