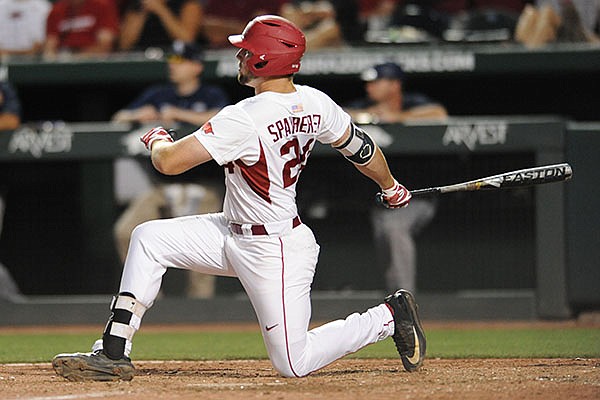 Arkansas first baseman Chad Spanberger records an RBI double during the fifth inning of an NCAA Regional game against Oral Roberts on Friday, June 2, 2017, in Fayetteville.

FAYETTEVILLE — Chad Spanberger is showing no signs of slowing down.

Arkansas' junior first baseman didn't hit his 20th home run of the season in Arkansas' opening NCAA Tournament game against Oral Roberts, but he did play a key part in the 3-0 victory less than a week after winning SEC Tournament MVP honors.

Spanberger broke a scoreless tie by lacing a perfectly placed double down the right field line to drive in Jack Kenley in the bottom of the fifth, giving the Razorbacks (43-17) a lead they wouldn't relinquish.

"I think just about anyone in the ballpark knew something was going to happen when he was at the plate," Arkansas third baseman Jack Kenley said.

It wasn't the easiest ball to hit, much less drive. Spanberger nearly went down on one knee digging out the low pitch from ORU starter Miguel Ausua.

"Tried to get him out with a change-up outside and missed the outside corner, then tried to come back with a slider and he got ahold of it and drove it into right field," Ausua said.

"We knew coming in he was hot. I don't think the pitch he made was a bad pitch, I just think a good hitter made a good swing," ORU coach Ryan Folmer said.

Spanberger entered the game fresh off a memorable run in the SEC Tournament. He finished the tournament 8 for 19 with five home runs, including one three-homer game and another with two homers.

He finished Friday 2 for 3 in four at-bats. He didn't get a chance to do any more damage in his last trip to the plate because Folmer opted to intentionally walk Spanberger with a runner on second and one out in the bottom of the seventh in a 2-0 game.

The Golden Eagles didn't want to risk Spanberger coming through with his 33rd extra-base hit of the season.