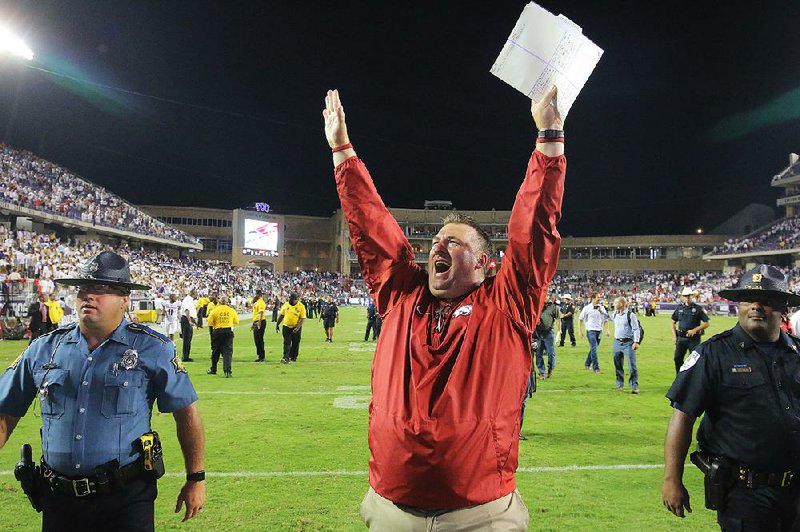 Arkansas Razorbacks football Coach Bret Bielema preaches to his players about the importance of living beyond one's comfort zone.

It's a belief Bielema embraced after growing up on a hog farm in rural Illinois, where the community had neither a stoplight nor a fast-food establishment.

In a few weeks, Bielema, 47, will take one of his biggest steps yet outside of that comfort zone.

Bielema is about to be a father.

He and his wife, Jen, are expecting thier first child, a daughter, in July.

"Not that I don't want it, but it's going to be something that's going to be totally new with me," Bielema said. "I'll probably have to do things I haven't ever had to do before."

Bielema already has, accompanying Jen on one of her first doctor's appointments where he saw the child's image on a TV screen.

Then, there was the night Bielema heard the child's heartbeat and felt her kick.

Bielema said being overprotective is something he's going to struggle with as a father.

"They have to grow, but the idea of her becoming a nun is good," Bielema said.

Bielema said he doubts anyone will notice a big difference in him once the baby is born.

"It brings new thoughts in your mind and new perspective," Bielema said. "I've always felt the need to take care of my family, but now it's my family. Now it's going to be another life that's depending on you.

One habit Bielema adopted years ago as a Kansas State assistant was sending players cards on their birthday.

Bielema said he believes he has "a care factor" that's pretty high for a coach.

"One of the promises I always try to truly make to a parent is you send me your son, I can't promise playing time," Bielema said. "I can't promise a degree.

It will be a few years before Bielema gets to do it himself, but he has made it a point to allow his assistant coaches to take their children to school each Tuesday and Thursday of spring practice and the first day of school in the fall.

Bielema said he doesn't want the kids of his assistants to miss out on having their father take them to school.

"I don't want a kid going to school who has a great dad at home and they see all the other kids lined up with their dad taking them to school," he said. "'Why isn't my dad taking me to school?' "

Bielema wants to win on the field, but he said seeing his players mature is the most rewarding part of the job.

"I love to win," Bielema said. "I've won championships, I've seen guys have successful careers and chase their dreams, but any type or growth, I just think it's awesome.

"There's a million reasons to do this job, but a lot of times when you see a kid literally change his perspective on learning, it's one of the more gravitating moments for you. A kid that comes in as an at risk and all of sudden he's All-Academic SEC and that's happened all over the place. That's pretty fun."

Bielema said he has worked to improve an academic culture that once included a group of 15-20 players who skipped town before finals, willing to take a D instead of a B.

One of the first messages Bielema tried to convey to the team when he arrived in Fayetteville was that you must care for yourself before you can care for others.

Fundamental to Arkansas' program is the work done by Ben Herbert, Bielema's strength and conditioning coach for eight of Bielema's 11 years as a head coach.

One of Herbert's first initiatives was to get players to improve their nutrition and sleeping habits.

"A kid goes in and works his tail off for two-and-a-half hours on a Thursday, and then he goes out that night and maybe takes part in a couple of cheeseburgers and a couple of beers and goes to bed at two in the morning," Bielema said. "He takes away from all of the value of that two-and-a-half hour work out."

To illustrate his point to the players, Herbert brought plants into the weight room and fed plant growth to one plant while another was given Miller Lite and Doritos.

"In like two weeks, the other plant had grown like 8 inches and the other one is dying," Bielema said. "He let the guys feed the bad one. You had a bad workout, why don't you throw a shot of whiskey on top of that plant.

"They all got equal amount of light, they all had the same benefits, but one had poor diet habits and one had great diet habits. It showed our guys visually what's at risk and what the rewards are."

ONCE A HOG, NOW A RAZORBACK

Many of Bielema's basic beliefs date back to his childhood in Prophetstown, Ill., where he learned about the importance of expanding his horizons.

One such experience occurred at age 7 when he spent his first night away from home with his best friend Dana Taylor and sat down to have dinner.

"It was me, my buddy, his mom, and he had a little brother Jarod and his dad Mark," Bielema said. "I'm like what the heck is dad doing at the dinner table. At my house, we had a six-person dinner table. Well, I had five bothers and sisters and two parents so we had seven so everybody ate at the table, but my dad ate in the living room with a TV tray because there wasn't any room at the table to eat.

"I just thought everybody's dad ate in the living room because you don't know what you don't know. I remember at the time I was in the second grade, so for seven years that's all I knew."

Seeing his friend's father eat at the table baffled the young Bielema.

"I came back and I was messed up," Bielema said. "I remember asking why does their dad eat at the table when my ... it was math. It was a math equation. There wasn't room. I interpreted that as he liked us more because he ate at the table and my dad didn't."

That night spent at his best friend's house has helped shaped his way of dealing with his players.

"So one of the things I always say to my coaches is they don't know what they don't know," Bielema said. "Even at 18 years of age, there's things they've never seen before that we think they have. So don't get pissed or mad at them for something they don't know."

Bielema said he realized there was another world outside his hometown when he walked on at Iowa as a defensive lineman and was later awarded a scholarship.

Not only did Bielema discover Subway and McDonald's but he also got to fly on an airplane.

During his redshirt freshman year at Iowa in 1988, Bielema experienced his first airplane ride as the Hawkeyes headed to Atlanta for the Peach Bowl.

The night before the trip, Bielema stayed up all night.

"I didn't sleep a lick because I was so petrified of that flight," Bielema said.

Bielema said his parents laugh about his initial fear of airplanes.

"They know that world where I came from," Bielema said. "I'll be in four states in one day now and they'll be like it's just crazy."

Bielema's willingness to expand his comfort zone doesn't classify him as a daredevil.

Bielema, who is admittedly scared of heights, said he will likely never parachute out of an airplane or bungee jump.

"I figure in my lifetime I've danced with the devil too much," he said. "I've put myself in situations that haven't been great. I don't need to push the risks."

Add zip lining to the list of no-nos for Bielema.

"I believe I have a built-in excuse when they say maximum weight 225," Bielema said. "I use that to my advantage,"