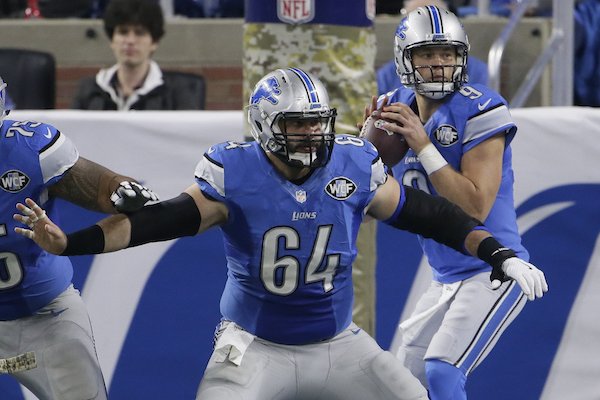 Swanson said the camp brought back memories of the time he participated in a camp at the University of Arkansas, Fayetteville.

Swanson, who is entering his fourth season with the Detroit Loins, signed with the Hogs in 2009 out of Kingwood, Texas, after attending a Razorbacks camp in July 2008, earning a scholarship offer.

He recalled how he and his father Todd went about the recruiting process after completing his junior season of high school.

"My dad and I had to go to one-day camps for the majority of my offers," Swanson said. "At the time, all I received was a single sheet of paper that was a generic computer-generated letter from football programs instead of a letter from a coach, asking me to attend various one-day camps."

Swanson and his father decided on the college camps he would attend in hopes of earning offers.

"The last weekend of camps came down to either Baylor or the University of Arkansas," Swanson said. "Knowing that Arkansas was in the best conference in college football, it was a no-brainer for me."

It was love at first sight for Swanson as he and his father flew into Northwest Arkansas Regional Airport.

"I remember flying over the campus and thinking how cool the stadium looked," he said "After our short drive through the middle of nowhere from XNA, we got to campus. From the moment we turned down Razorback Road, I knew this was it. At that point, I hadn't even checked into the camp, much less met with anyone from the program."

"I took advantage of every opportunity that came my way," Swanson said. "I made sure I was the first to every line. I wasn't a very obnoxious player, I kept my head down, showed them what I was capable of doing, and they liked it."

As a true freshman, he decided to watch the same camp he attended the previous summer and saw something humbling.

"Walking by the check-in table, I noticed the list of players attending," Swanson said. "On that list, some names were highlighted, so I asked why. I was told that those were the players that were being looked at by the program for potential scholarships. They were given jersey numbers 1 through 30 so that coaches knew who to look at. When I attended that camp, I was given jersey No. 90."

"Don't get caught up in the politics of what you are or aren't ranked, or how many stars you have or don't have on different websites," he said. "The only thing that matters is what the coaches in a particular program think about you."

"Never give your coach a reason to not like you. Always do more than what is expected of you."