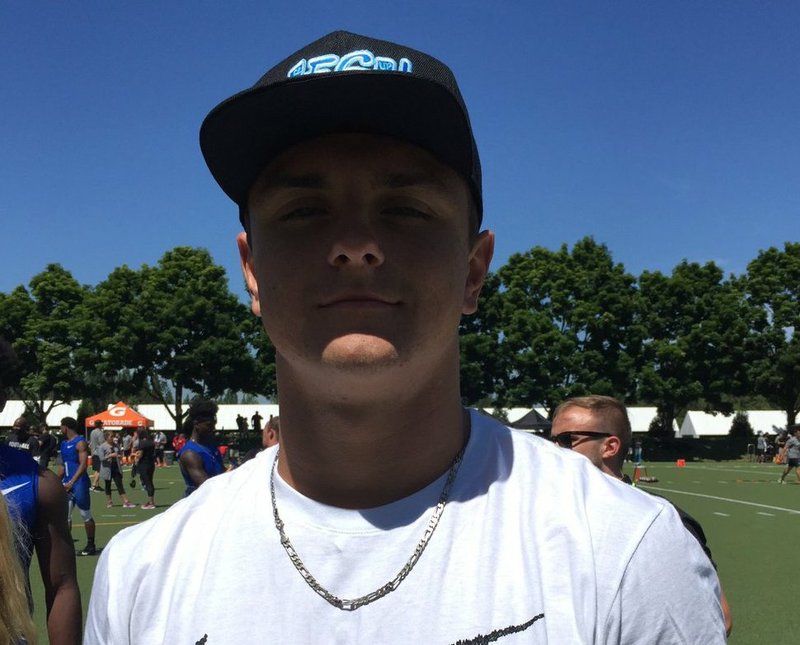 BEAVERTON, Ore. — Highly recruited tight end Luke Ford committed to the Arkansas Razorbacks a day after visiting Fayetteville in March, but June 10 he reopened his recruiting to visit other schools.

“Right now, I’m basically going around and checking out all the schools I can,” Ford said. “I went to Georgia, went to Alabama, went to Auburn and went to LSU. All of them have nice facilities like Arkansas. It just has to come down to tight end usage and where I fit in best.”

Ford, who’s at The Opening, the prestigious summer event for the top 166 prospects in the nation at Nike Headquarters, said he’s still in contact with the Razorbacks.

“I still talk to Arkansas all the time,” Ford said. “Bret Bielema was actually telling me good luck at the finals, and I talked to Coach [Barry] Lunney. So I’m still good with all of them.”

He explained his decision to reopen his recruitment and look at other options.

ESPN rates him the No. 2 tight end and the No. 93 overall prospect in the 2018 senior class, and July looks to be a busy month for Ford.

“It’s kind of up in the air, but I think I’m going to Michigan, Texas, maybe Florida,” he said. “Illinois for sure, being home state. I think maybe some others, but I’m not sure.”

In addition to his two-day visit in March, Ford visited the Hogs for the June 3 elite prospect camp. Another trip to Fayetteville looks likely.

“I’ll probably come visit Arkansas maybe during the year and maybe take an official out there, or I’ll go in July depending on how it works,” Ford said. “Everybody has kind of has a Friday night lights on the 21st and the 28th. I’ll see how that works out.”

After recently visiting Alabama, Ford mentioned the Crimson Tide as his leader but Thursday seemed uncertain.

“I think they’re up there,” he said. “They might be in the lead actually. Either them or Georgia. … I mean, I don't know, they’re all good. Georgia, LSU, Auburn, they’re all … Arkansas … all of their facilities are amazing. It’s going to have to come down to the tight end usage and where I see myself going and fitting in with the campus and where I want to live for the next four years.”

Ford is considering making his final decision on national signing day or at the Under Armour All-American Game in January in Orlando, Fla. He said he could end up in Fayetteville.