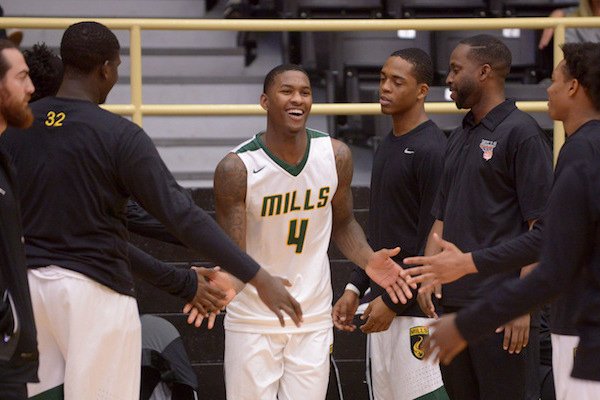 Darious Hall of Little Rock Mills takes the court during introductions on Saturday Nov. 26, 2016 before the game against Bentonville in the Bentonville Showcase basketball tournament in Bentonville's Tiger Arena.

“If you would’ve told me two years ago this was going to happen, I wouldn't have believed it,” Cooper said. “It’s amazing the transformation he’s made.”

Hall’s game has matured along with his mental approach since his sophomore season and that helped elevate his skill set to where he’s one of the better prospects in the nation. ESPN rates him a 4-star prospect and the No. 36 power forward in the nation.

“It’s amazing the progress he’s made from two years ago and even to last year,” Cooper said. “When your best player is your leader and he buys into whatever the team needs….he’ll play five positions and he doesn’t complain. He’ll pass it if he needs to or if we need him to score. He’s not caught up in stats. He’s just caught up in wins and that’s contagious to the rest of them.”

Numerous times Hall, 6-7, 210 pounds saw limited action in the fourth quarter of games for the 27-2 Comets, but still averaged 16 points, 9 rebounds, 3 assists and 2 steals this season.

Hall’s maturity is also reflective in the classroom. He’s had a 4.0 grade point average the last three semesters. Cooper said it’s been a joy to see Hall’s growth since his arrival at Mills.

“It’s night and day,” Cooper said. “His biggest progression is his decision making. He’s a little wild and he’s grown from that. His skill set… he can actually shoot the ball. Sometimes he doesn't shoot enough. We encourage him to shoot it more. He sees things on the court and he can explain it to me. He’ll say ‘Coach I see this if we move it here we can get this’ and I’ll go ok. A lot of times it’s something I don't see.”