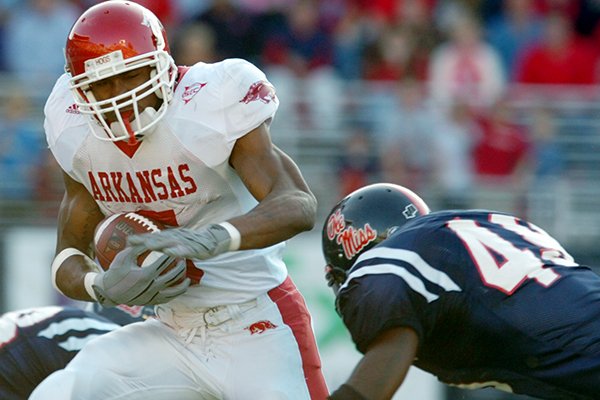 McFadden was as gracious, kind and generous of an inductee as there has ever been. He must have posed for 1,000 pictures and signed as many autographs, and he was never in a hurry.

His wife, Tita, was just as gracious.

Darren and Tita met when McFadden played for the Oakland Raiders. She had no idea who he was until he told her what he did for a living.

"I told him I was not familiar with his name and the only reason I was talking to him was he's kind of cute," she said with a laugh.

They seem like a very happy couple, and recently McFadden had a painting commissioned for their anniversary. It depicted him in the uniforms of the teams he had played for, but in the middle, rising together were Tita and Darren.

Darren McFadden through the years: Click here for larger versions

McFadden had his Hall of Fame tuxedo made for him because he wanted his to be Razorback red.

Darren and Tita now live in Dallas, a city she has grown to love.

McFadden, of course, was a two-time runner-up for the Heisman Trophy. The guys who beat him out did not make an easy transition to the NFL.

In 2006, Ohio State quarterback Troy Smith won. He knocked around the NFL for parts of five seasons for three teams.

McFadden rushed for a school-record 4,590 yards in three seasons at the University of Arkansas, Fayetteville, averaging 5.8 yards per carry and playing quarterback in the Wild Hog formation. He was drafted with the fourth pick of the first round by the Oakland Raiders, who put little emphasis on offensive linemen during McFadden's seven years there.

Thus he was injured several times.

He signed with the Dallas Cowboys in 2015, became the starting tailback and rushed for 1,089 yards. In the offseason, he broke his elbow and missed all but three games last season.

"I hated sitting out," he said, "but to be honest, it has been a long time since I have felt this healthy. I'm going to make the most of being off last season."

During his acceptance speech, he paused before thanking Dr. Jack Vander Schilden.

"Without him, I wouldn't have a toe or had a football career," McFadden said.

Vander Schilden, a surgeon at UAMS, spent eight hours reattaching McFadden's big toe after an altercation before his sophomore season at Arkansas.

McFadden and the late, great Larry Jackson played their football at Arkansas, but in an Arkansas Sports Hall of Fame first, the school with the most representatives was the University of Arkansas at Monticello.

They were aided and abetted by Master of Ceremonies Chuck Barrett, who did a great job.

Richard Johnson, the Hall of Fame's new president, is on a two-year term. First vice president is Greg Flesher, and Greg Hatcher has accepted the offer to be second vice president. Four college scholarships also were awarded.