Razorbacks softball rolling behind national player of the week 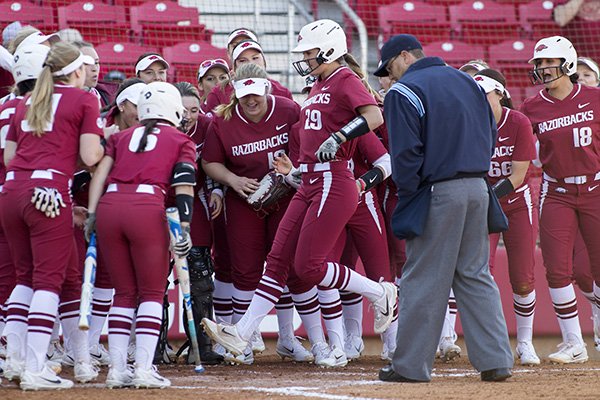 Arkansas players congratulate Nicole Schroeder (29) as she crosses the plate Friday, March 3, 2017, after Schroeder's two-run home run in the fourth inning against Nebraska at Bogle Park in Fayetteville.

FAYETTEVILLE — Arkansas' Nicole Schroeder hit eight home runs in 2016, which makes her start to the 2017 season all the more notable.

The redshirt senior has an NCAA-leading 12 home runs through 20 games this season. Schroeder also leads the NCAA with 40 RBI and 76 total bases, and is 12th with a .536 batting average.

"It's been pretty great," Schroeder said of her start to the season. "To be 19-1 is awesome and the home runs on top of that are pretty cool, too."

Schroeder's improvement over last year mirrors her team's own improvement. Arkansas is ranked No. 24 by USA Softball and is just outside the coaches' poll this week after a 19-1 start, the best in program history.

The Razorbacks already have eclipsed their win total from last season when they finished 17-39 and 1-23 in SEC play for the second consecutive year, but the first season under coach Courtney Deifel.

Arkansas faces its biggest test so far this season Friday when it opens SEC play at No. 11 Alabama (21-2). The Crimson Tide has won 14 straight games, while the Razorbacks come into the series on an 11-game win streak.