Despite construction, Hogs plan to play spring game on campus 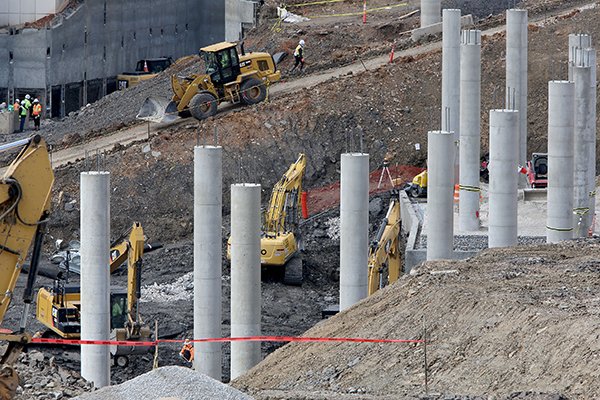 Work continues Monday, March 13, 2017, on the north end zone of Donald W. Reynolds Razorback Stadium in Fayetteville. The renovation is part of a $160 million project that will fully enclose the 78-year-old stadium. The stadium will grow from a capacity of 72,000 to about 77,000 in September 2018. The project includes new premium seating, including Founders Club Suites on the east side of the stadium, outdoor loge boxes - a cluster of four to eight seats separated from others by a partition - and club seating. The new seating areas will connect the concourse to the east and west walkways.

FAYETTEVILLE — Arkansas plans to play its spring game at Razorback Stadium, but attendance might be capped because of construction work on the stadium's north end.

Arkansas coach Bret Bielema said Wednesday that the annual scrimmage could be limited to an attendance of between 25,000 and 30,000. Bielema said that won't be determined until some time next month.

The spring game is scheduled to be played at noon on Saturday, April 29.

Construction crews are doing site work on the north end of the stadium as part of a $160 million renovation that will add about 4,800 luxury seats. The project is scheduled to be completed some time next year.

"I think after we're done with (spring practice) the trucks are going to be rolling in on that one side," Bielema said. "We looked into different options but the administration and everybody just felt it would be good to have the spring game in some capacity."

Because of the construction work, the annual RazorFest activities will be conducted at Bud Walton Arena from 9-11:30 a.m. The event with inflatables, concerts, a pep rally and autograph lines was held on the north side of the stadium.

Champions for Kids, a nonprofit organization, will not sponsor the event this year, said Rick Schaeffer, spokesman for the organization.

CORRECTION: An earlier version of this story incorrectly stated RazorFest would not be held this year. The event will be held at Bud Walton Arena and will not have the same sponsor.