State of the Hogs: Receivers take advantage of Allen's accuracy 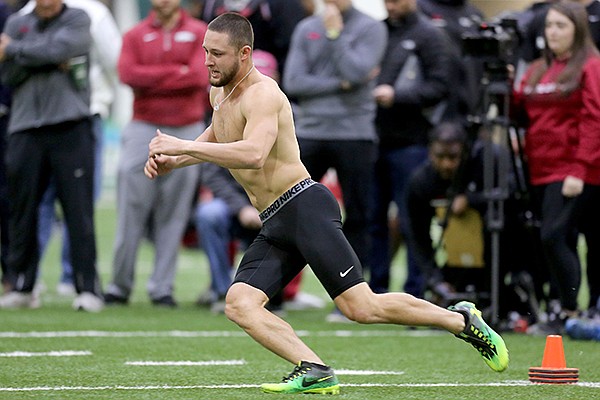 Then, there is one thing that will always be the same: Drew Morgan is still quick, elusive and willing to fill a reporter's notebook.

Those were among the major takeaways Wednesday from Pro Day for the Arkansas football team. All 32 NFL teams were represented, including several position coaches.

“I see a couple of defensive line coaches (from Detroit and Tennessee),” said an NFL offensive coordinator who remained anonymous. “But I think mostly it's a lot of area scouts.”

There were 18 players working out, including former UA quarterback Brandon Allen. It was a favor to his former teammates, including wide receivers Keon Hatcher, tight end Jeremy Sprinkle along with Reed and Morgan. Allen is under contract with the Jacksonville Jaguars.

The wow moment of the day came when Allen tossed a 50-yard bomb to Reed. The catch was acrobatic and produced cheers, including some excited yelps from a few scouts.

“Reed really helped himself,” said one scout. “Of course, he can run. But he showed us some good stuff as far as his hands.”

Reed was clocked in 4.37 in the 40-yard dash, but seemed less than enthused. He was hoping for something better.

“I stumbled out of there on the start,” Reed said. “I think I can do better than that.”

“What I tried to lower was my route time,” he said. “I wanted to be quicker in and out of my routes. I think I did that.”

Morgan dazzled, too. He made a one-hand snag that produced the same kind of noise as Reed's catch.

“I surprised myself,” Morgan said. “You don't want to one-hand them. But I didn't see that one until the last second.”

There was little doubt it was fun to play catch with Allen, his quarterback for three seasons.

“I came out here last year for pro day and watched Brandon throw,” Morgan said. “I told him then, 'See you here next year.' He said there would be no way. So I told him, 'Look who's back.'

“It was a lot of fun. He didn't skip a beat. It was like old times. He's so accurate. You knew that was going to be the same from him, everything right there and he did that. We were all glad he was here today.”

The workout was pre-determined. Morgan ran the called routes. He did the obligatory deep runs.

But he was pleased when the workout moved to the quick ins and outs that were the bread-and-butter for Morgan on third downs at Arkansas the last two seasons.

Morgan said it was the kind of stuff that Wes Welker talked to him about at the NFL Scouting Combine last month. Welker, now an offensive assistant with the Houston Texans, was a star slot receiver with several NFL teams. Morgan has similar talents as Welker.

“He told me, 'You are going to have 15 minutes at your pro day to show them that stuff,'” Morgan said. “So that's what I wanted to do today. I can run the posts and the go routes. But it's the short stuff where my quickness shines that I wanted them to see me do.”

Morgan said he'd already been told by his agent in the minutes after pro day that it was a good day.

“He'd heard from some teams,” Morgan said. “At this point, I'm happy with what I did. You'd always like to run a faster time, but I did well in the cone drills that show quickness. I dropped my time there.”

Morgan was ejected from the Belk Bowl for a spitting incident. Arkansas coach Bret Bielema made reference to that in his visit with media before pro day. He was asked if any NFL teams brought it up. They did not.

“What they've asked about Drew is the same they ask about a lot of players,” Bielema said. “It's never, 'How good of a player are they?' It's about their ability to learn and be coachable. I will say that he started worrying about this day on that day.”

Morgan didn't back away from questions about the Belk Bowl on Pro Day. He expected them. But he said it's been the media, not NFL teams asking the questions.

“To be honest, I haven't had one coach or team ask about it,” Morgan said. “At the combine, I had one team bring it up. I think it was the (Oakland) Raiders. A guy said, 'We aren't worried about it. It tells us you are feisty.'

“I will say that it's been hectic since then, getting ready for this. I am looking forward to a few days to step back now.”

Mostly, Pro Day went well for the Razorbacks. Typical of the day was the way Jeremiah Ledbetter ran the 40-yard dash. One scout timed Ledbetter in 4.68. That's lower than the defensive lineman ran at the combine.

“You just want to go out there and compete,” Ledbetter said. “That was the goal. You hope you can drop your time and I did that. But it's about competing.

“It was good to have a couple of (defensive line) position coaches here. That's good for me and the rest of our defensive linemen.”

Ledbetter played both tackle and defensive end for the Hogs. That's been a plus with NFL teams.

“Some like me at both spots, like the versatility,” he said. “I tried to show speed today. I dropped five pounds to 275 from the combine. My thought was that I could show a little faster today if I cut some pounds and I did that. I went from 4.84 to 4.68.

“Some of it is just being here and more relaxed. The combine is stressful. You go to the hospital for tests, do all of the interviews. There isn't any of that here and that seems to help you perform. They make the combine such a huge deal. This was much better. I felt good today."

D.J. Dean said he felt good no matter his times. The cornerback has battled through toe and hamstring injuries the last two years. He hasn't been productive on the field since his sophomore season.

"It's the best I've felt in a long time," Dean said. "I had scouts tell me I did well. I just hoped there is one team that likes me a little and brings me to camp. That's all I want, is one chance. Hopefully, I showed something today.

"I do want to thank Brandon Allen for helping us out. The receivers needed him and so did the defensive backs. We needed a quarterback to throw for us. I told him just throw them up and let me get one of them. He laughed about that."