Survive and dance: Hogs move on with comeback win over Seton Hall 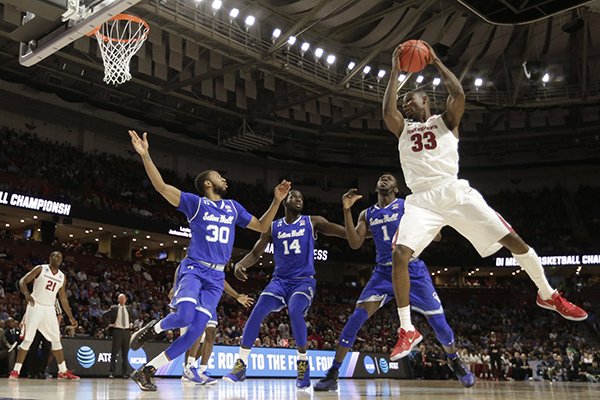 GREENVILLE, S.C. — Arkansas did just enough in the final minute to push its way through the NCAA Tournament's first round — aided by a couple of eye-catching calls and noncalls by the officiating crew, too.

Jaylen Barford hit the go-ahead layup with 57.8 seconds left to help Arkansas hold off Seton Hall 77-71 on Friday in the first round of the South Region.

Barford had 12 of his 20 points after halftime for the eighth-seeded Razorbacks (26-9), who erased an 8-point second-half hole and scored the final 7 points of the game to earn the program's third straight opening-game NCAA win.

"Coach (Mike Anderson) told us to keep chipping away," said Dusty Hannahs, who scored 14. "He knows we don't lose our head. We've been down a lot this year."

Barford's layup off Khadeen Carrington's turnover at the other end pushed Arkansas ahead for good. Then came a critical sequence, which started with Carrington's travel while being harassed by a double team near midcourt with 24.6 seconds left.

Hannahs threw the ball to Daryl Macon near the Seton Hall bench. As defenders converged, Macon stutter-stepped past them in an apparent travel that went uncalled.

Instead, Macon threw the ball to Barford, who was knocked to the floor on a foul by Desi Rodriguez as Rodriguez tried to stop the clock with 18.3 seconds left. Officials reviewed the play — which showed Rodriguez's hands touching only Barford's left shoulder and back, while his left foot clipped Barford's in an accidental trip — and changed it to a flagrant foul.

"I thought it was no play on the ball. That's as simple as that," Anderson said, adding: "It just came at a bad time, probably the right time for us."

Barford hit both free throws, then Macon added another to make it a 75-51 game.

Carrington missed a 3 at the other end in what amounted to the last gasp for the ninth-seeded Pirates (21-12).

"I think I made a basketball play," he said. "I didn't foul intentionally to hurt anyone. The officials called it another way, and that's that."

Seton Hall: The Pirates had a 17-5 run to take a 64-56 lead with 8:41 left, but their mistakes down the stretch hurt. They had nine of their 15 turnovers after halftime to deny their pursuit of a first tournament win since 2004.

Seton Hall had reached consecutive NCAA Tournaments for the first time since going to four straight from 1991-94.

"Got a lot of turnovers the last 6 minutes, but that's how the game ends," said Angel Delgado, the nation's leading rebounder who finished with 12 points and 13 boards. "We've just got to take care of the ball more."

Arkansas: The Razorbacks survived being soundly beaten on the boards (46-32) but they did just enough to speed the Pirates up and get the game closer to their preferred pace. They also made 18 of 23 free throws to help prolong their late-season surge.

"It's not something I marvel at," Anderson said of winning despite the rebounding trouble, "but we've done it before. We've got to get better at it."

MORE ON THE FLAGRANT FOUL

"When a player puts two hands on the back and doesn't make any attempt to play the ball or ... get in front of him, it's an F-1 foul," Collins said.

Arkansas advanced to Sunday's second round to face the Texas Southern-North Carolina winner.