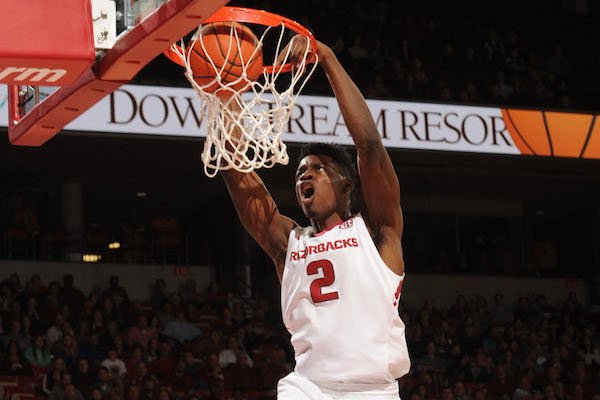 This is the first of a 12-part series reviewing the 2016-17 season for each of Arkansas’ scholarship players.

— Arkansas’ most athletic option at the 4. A great shot blocker in high school (3.9 bpg) as a senior, he wasn’t a big-time rim protector as a freshman, likely the result of being an undersized 4 adjusting to the Division I game. Did show flashes of potential in that area and posted a better block percentage (3.7) than Dustin Thomas and Arlando Cook, the 2 upperclassmen options at the 4.

— Very active, energy which showed up on the defensive end. His block percentage and 3.6 steal percentage were better than Thomas and Cook. His reserve status makes for a limited sample size, but his 100.3 defensive rating was better than both (Thomas - 103.3, Cook 104.2). Opposing players shot just 26 percent against him, according to Synergy Sports.

— Showed a knack for anticipating drives and a willingness to sacrifice his body to take charges. Drew 4 charges, which tied for third on the team despite playing the 10th-most minutes.

— Athleticism allows him to finish above the rim. His 6 dunks rank fourth on the team.

— Not shy when he did get playing time. Put up shots without hesitation and didn’t show any signs of nerves.

— Raw on the offensive end, the result of being largely relegated to playing in the paint in high school. Wants to transition into being a 3 in the future, but has a ways to go with his shooting and ball-handling, something he admits. His length and athleticism allow him to be a factor at the 4 despite being relatively undersized. Those same traits could make him a menace on the wing if his skill set catches up.

— Jumper is a work in progress. He and the coaching staff reworked his form once he got on campus and it doesn’t look natural on a consistent basis at this point. Made just 3 of the 9 jumpers he took this year.

— More turnovers (11) than assists (7), not surprising given the position he plays and his lack of experience.

— Did not make a big impact on the glass, grabbing just 9.8 percent of available rebounds when he was on the floor, a number that ranked last among big men and was tied with Manny Watkins for sixth on the team. Has athleticism, but will need to add strength in order to hold up on the boards against taller players.

— Occasional defensive lapses, not unexpected given his experience.

Bailey is one of the most intriguing players on the team because of his positional versatility and athletic gifts. He wants to transition into being a 3, a move he isn’t ready to make from a skill set standpoint as it stands now, but one he could potentially pull off with a dedicated summer in the gym.

He made 2 starts in February and his talent was on display when he played a career-high 19 minutes in the near-upset of North Carolina in the second round of the NCAA Tournament. He had 4 points, 3 steals, took 1 charge and probably should’ve drawn a second had the whistle blown on Joel Berry’s push-off in the final minutes. Anderson played Bailey the final 12 minutes of the game, a show of trust in a freshman who bounced in and out of the rotation.

Moving forward, he could be a valuable combo forward who impacts the game with his athleticism and motor. If and when his skill starts to catch up to his physical gifts, he could be a very good player.