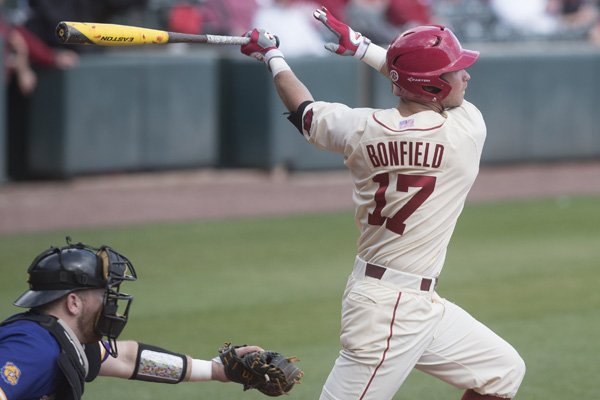 FAYETTEVILLE — The story at the plate for the Arkansas baseball team has been the home run. The Hogs lead the SEC with 30 home runs, 18 more than their opposition.

Nine different players have hit home runs in a 17-4 start, seven have two or more. By comparison, New Orleans has hit just 18 home runs in a 13-7 start ahead of a non-conference trip to Arkansas at 6 p.m. Wednesday.

The UA numbers are up over the last few years. The Hogs hit just 27 and 28 in 2013 and 2014, respectively. That's when the NCAA went to composite bats with reduced spring in the barrel. The bats have gotten better gradually. The Hogs hit 53 and 49 homers the last two years with an adjustment in the baseballs.

“I do think the bat companies have balanced the bats a little better. The bats are fine now. At first, the manufacturers were afraid to spend too much money on the bats because they didn't know if they were here to stay.

“But what happened really, is that they gave us a better baseball, with lower seams. It's still not like the major league ball. If we got that ball, with almost no seams and a little harder, we'd have something. That baseball travels.”

New Orleans might not be hitting home runs at the same rate as Arkansas, but the Privateers can hit. They enter with a robust .308 average. They beat LSU in two midweek games earlier this season. That was enough to get everyone's attention for their trip to Baum Stadium.

“That's against good teams,” Van Horn said. “We know we are facing a good opponent. We just have to go out there and try to get outs.”

Arkansas clean-up hitter Luke Bonfield has four homers and a .298 batting average. He's not surprised with the big totals on home runs.

"I think what you see is that we have smart hitters," he said. "We can work the count. When you do that, it gives you the time to get the pitch you want. That's when the home runs come."

The Hogs scored all of their runs via the long ball in the first two wins against Mississippi State. They hit two homers in each of those games. They were up 5-1 with eight singles through six innings of the Sunday victory. Carson Shaddy did hit a solo homer for the final run in a 6-1 triumph.

"We showed we can play small ball, win without the homer run, too," Bonfield said. "We are a confident team. We know we are playing a strong team in New Orleans. They've done well against SEC teams and beat LSU twice this season already. We know we have a tough opponent."

Van Horn projected lefty Kacey Murphy (2-0, 3.27 ERA) as the starting pitcher against UNO. The sophomore from Rogers Heritage pitched to one batter in the Sunday victory over Mississippi State. He'll get extended work against UNO.

“We'll see how long he can go,” Van Horn said, noting the Hogs won't use a lot of front-line pitching against the Privateers.

But, he did say that top bullpen man Cannon Chadwick could be available for a few outs.

“If you have a chance to get a win, we'd do what we had to late,” Van Horn said. “But by the same token, you don't want to empty the tank 48 hours away from playing an SEC series at Missouri.”

Along with committing to Murphy as the starting pitcher, Van Horn also said Jared Gates would see his first action. Gates, the top UA hitter in the fall, has been out with a broken bone in his hand which required surgery in January. The Wichita, Kan., product via Iowa West Community College has been taking live pitching in the cage.

“We think he's ready to roll,” said Van Horn, naming him the starter at third base for Wednesday.

“Our players are excited. They want to see him as much as our coaches. He's one of our most popular players. I just saw him (in batting practice Tuesday) swinging it pretty good.”

Van Horn said infielder Hunter Wilson is still hobbled after fouling a pitch off his right shin against Alcorn State. He won't play against UNO.

“We are going to put him on our 27-man roster (for the Missouri trip),” Van Horn said. “I'm not sure he's ready, but he brings energy to our team, on the field and in the dugout.”