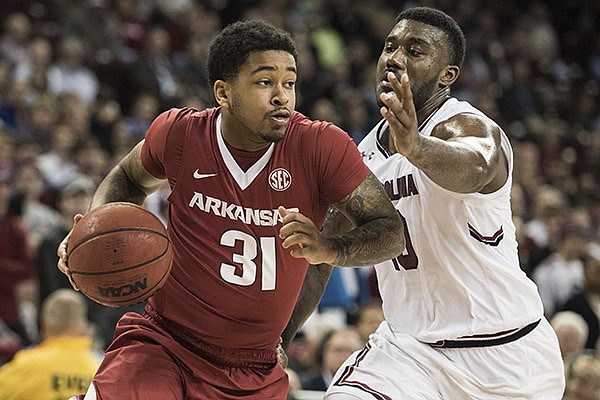 FAYETTEVILLE — This is the third of a 12-part series reviewing the 2016-17 season for each of Arkansas’ scholarship players.

— When playing well, he was easily Arkansas’ best penetrate-and-dish guard, able to beat his defender off the bounce to get into the lane, collapse the defense and either find teammates for easy finishes near the rim or kick to open shooters. At times the only guard who consistently looked to set up his teammates when driving. Especially excelled in this area in late December and January. In January, Arkansas averaged an impressive 120.9 points per 100 possessions when he was on the court, a number that would rank second in the nation if it was for a team for the full season.

— Generally plays with a nice pace with the ball in his hands and can create separation with series of spins and half-spins, often faking defenders out of position.

— Had a career year shooting from 3-point range, hitting a respectable 35.6 percent from range even with a late-season slump. Despite his height, he excelled at hitting catch-and-shoot jumpers while guarded, knocking in 40.5 percent of those attempts and averaging 1.214 points per possession, per Synergy Sports, which ranks in the 82nd percentile nationally. Averaged just 4.8 3-point attempts per 40 minutes, so he could probably benefit from letting it fly more often from deep.

— Willing to take shots late in the clock, where he placed in the 71st percentile by averaging 0.875 points per possession, solid for a situation that generally tends to lead to contested looks. Doesn’t shy away from big moments or big shots.

— Can be susceptible to getting his shot blocked around the rim, but generally a good finisher, especially given his size. Shot 55.9 percent around the rim in the halfcourt, which ranked in the 63rd percentile. Can be a clever finisher who has mastered the up-and-under reverse layup.

— Has a nose for tracking down teammates’ shots off the rim. His 29 offensive rebounds were second among guards

— Good at running the break and flanking to the wings to score.

— Has exceptional chemistry with Trey Thompson. The pair routinely connected for baskets on offense.

— Opportunistic defender who has quick hands and will pay off gambles for steals with a decent success rate. His 2.9 steal percentage ranked second among regular rotation players.

— Ranked in the 91st percentile as a primary defender by Synergy Sports, allowing just 0.685 points per possession.

— Inconsistency was his main issue. He began the season playing like an improved version of his freshman self, but slumped for most of February and March, both in shooting and in his decision making on the offensive end. His struggles may be partially the result of a shoulder injury he suffered in January but continued to play through.

— He shot just 9 of 34 from 3-point range in February and March and hadn’t made a 3 in the latter month until the North Carolina game.

— He was a playmaker less often down the stretch, as much of his drive-and-dish game vanished. Instead, he was occasionally a ball-stopper, which often led to contested shots. Arkansas averaged just 92.4 points per 100 possessions with him on the court over the course of the last 10 games, rendering him a net rating of minus-8.5. He had

— Many of his weaknesses can be attributed to his lack of size, which can be a hindrance, especially on defense, in some matchups.

— Lack of height also results in him having the lowest defensive rebounding percentage (5.9 percent) on the team, not necessarily a huge deal given the position he plays.

— Struggled as a one-on-one scorer in the halfcourt. Only made 4 of 17 shots in isolation situations.

— Can be caught sleeping off the ball on defense and at times ventures too far away from his man to recover and contest adequately. He's a heady player and the gambles at times pay off, but they can lead to open 3s when they don't.

Beard entered the second-round matchup with North Carolina having had 5 scoreless outings in his last 12 games, a lack of production that resulted in dwindling minutes. But his superb performance off the bench against the Tar Heels (10 points, 5 rebounds, 3 assists, 1 steal) served as a reminder of how impactful he can be when he’s playing well. That version of Beard commonly appeared in the first 3 months of the season when he was playing like one of the Hogs’ best players. It all but vanished for most of February and March, the the shoulder injury a possible culprit.

As a senior, Beard will be counted on as a playmaker and shot-maker. He will have to help pick up some of the 3-point shooting slack left by Dusty Hannahs’ graduation, a task he should be up to if he can find a way to stretch the 41.1 percent shooting from deep from the first 3 months of the season for an entire season.

At his best, Beard gives the Razorbacks a creator who can hit 3-pointers. Those are 2 very valuable skills the Hogs will need him to consistently bring to the table as a senior.