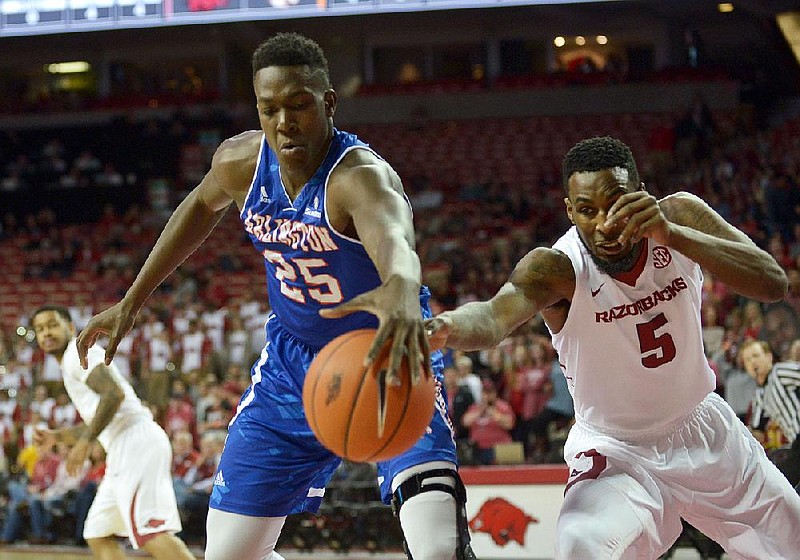 NWA Democrat-Gazette/BEN GOFF @NWABENGOFF Arlando Cook (5) of Arkansas tries to steal from Kevin Hervey (25) of UT Arlington on Friday Nov. 18, 2016 during the game in Bud Walton Arena in Fayetteville.

FAYETTEVILLE — This is the fourth of a 12-part series reviewing the 2016-17 season for each of Arkansas’ scholarship players.

— One of the best motors on the team. Has good energy and will make hustle plays. Outworks opponents.

— Hustle showed up on the offensive glass at times.

— Good at running the court thanks to effort and solid speed for a 4. Good finisher in transition, shooting 61.5 percent.

— Above-average foul shooter (64.9 percent) for a big. Hit key crunch-time free throws while a part of the closing lineup in the nonconference win against Texas.

— Good agility and change of direction for his size.

— Solid at closing out on opposing players and either contesting the shot or being nimble and balanced enough to hang with them on a drive. Ranked in the 91st percentile nationally at defending spot-up opportunities, allowing just 0.677 points per possession, according to Synergy Sports.

— Able to pester opposing guards when picking them up full court. Did a decent job staying in front of them and preventing blow-bys while subsequently forcing the offense to take additional time getting into their sets because of the pressure. Often guarded in a frantic, arm-waving fashion that seemingly annoyed opposing ballhandlers.

— He and Trey Thompson were very successful as a bench frontcourt duo.

— Was not a scoring threat. His .438 effective field goal percentage ranked last among the regular rotation players, as did his .479 true shooting percentage.

— Struggled as a shooter, which allowed defenses to sag off of him and the rest of Arkansas’ 4s when they were off the ball. Made just 7 of 29 jumpers, which put him in the 4th percentile nationally. Was 3 of 19 on guarded catch-and-shoot jumpers.

— Average finisher around the basket. Made 51.5 percent of his non-post-up shots, which placed him in the 36th percentile. Only had 6 post-up possessions all season (scored on 3).

— Occasionally careless with the ball. Had nearly twice as many turnovers (23) as assists (12), not necessarily surprising given his position and role, but his 17.8 turnover percentage was highest among the 9 regular rotation players.

— Had the team’s only net rating (-6.8) worse than minus-1 among players who played meaningful minutes.

Cook’s avenue to an increased role and earning a permanent spot in the rotation is tied to his ability to impact the game as a hustle player who possesses good agility for a big. His motor allowed him to impact several games, most notably wins against Texas and at Texas A&M, but his inconsistency meant his minutes were often sporadic from one game to the next. He largely struggled offensively.

There figures to be a logjam for playing time at the 4 next year with Cook, Dustin Thomas, Adrio Bailey and Brachen Hazen, with signee Darious Hall joining the mix and Trey Thompson able to play in 2-big lineups. This summer will be an important one for Cook’s development.