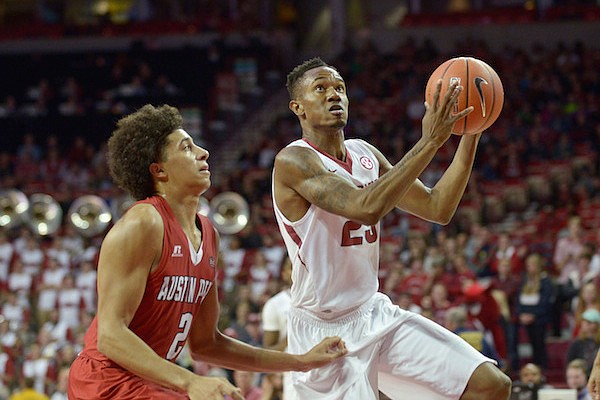 FAYETTEVILLE — This is the seventh of a 12-part series reviewing the 2016-17 season for each of Arkansas’ scholarship players.

— Played behind 5 upperclassmen in the backcourt and wasn’t a regular part of the rotation once SEC play began, but flashed his immense offensive potential in nonconference action.

— Mostly played with restraint when on the floor, but possesses a scorer’s mentality. Averaged 6.7 points in games when he played at least 10 minutes, which translated to 19.5 points per 40 minutes. When he was in the rotation, he was capable of adding firepower to bench units. In a very limited sample size, he averaged 1.186 points per possession, which put him in the 98th percentile nationally.

— His 2 best attributes are his shot and athleticism. Very gifted in both regards.

— Already an elite athlete, he has great leaping ability and is quick. At 6-5, his hops allow him to finish above the rim with ease. In time, his quickness should help him on both ends of the court.

— His vertical helps him get his shot off with ease against most defenders, allowing him to rise above contests to get a clean look, both off the dribble and on spot-up opportunities. He hit 5 of 7 catch-and-shoot jumpers while being closely guarded, according to Synergy Sports.

— Overall, he made 50 percent of his 3-pointers (12 of 24), including 9 of 15 in games in which he played double-digit minutes and got into a rhythm. Again, a limited sample size, but his smooth form, quick release and ability to use his athleticism to generate separation suggest he will be a very good shooter.

— Has the length and athleticism to be a good defender in time.

— Ballhandling is a weakness. He was for the most part limited to being a catch-and-shoot player or someone who fired a mid-range shot after one dribble. He can be effective doing both, but developing the ability to put the ball on the floor to attack closeouts and get to the rim will make him a much more dangerous offensive player. If he at some point down the line is able to tighten his handle enough to begin making plays off the bounce, he will be a nightmare for opposing defenses.

— Didn’t display much as a passer, not necessarily a surprise given his role was an instant-offense, catch-and-shoot spot player.

— Adding strength is a must. Very light as a freshman, but should be a different player physically moving forward. Bulking up will allow him to attack the rim better on offense and wall off opposing guards on defense.

— Tended to get lost defensively. Will need to learn rotations and be able to make split-second decisions on the fly.

— Had a tendency to stand up rather than get in a stance when defending the ball.

Dusty Hannahs and Manny Watkins averaged 47.1 minutes between them. With their graduation, Jones has an opportunity to become a major part of the rotation as a sophomore. His shooting ability will be important for a team that will need to collectively try to fill some of the void left by Hannahs’ departure.

Jones’ combination of shooting, size and athleticism give him arguably the highest ceiling on the team. How much he progresses on defense will likely determine whether his minutes are in the teens or 20s. If he makes strides on that end and earns Mike Anderson’s trust, he could be in for a big sophomore season.