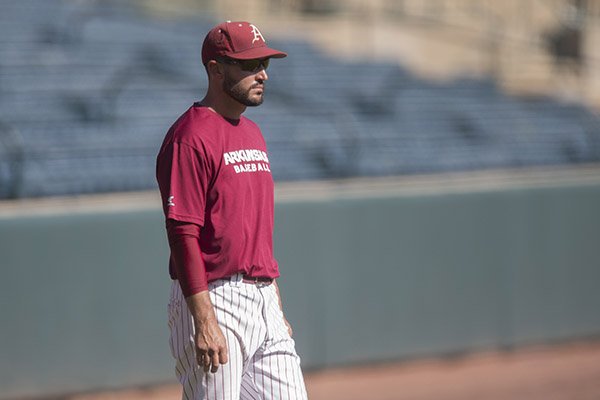 FAYETTEVILLE — Things are getting back to normal for Tony Vitello.

Admittedly, the past five days have been trying for the Arkansas assistant baseball coach, whose father and an older sister were involved in a serious car accident on their way to watch the Razorbacks play last Saturday in Columbia, Mo. Both have been released from the hospital.

Greg Vitello and Kara Vitello were traveling westbound on Interstate 70 when they were involved in an accident involving two semi-trucks and another passenger car. The Vitellos were trapped underneath one of the semi-trucks for nearly two hours and were cut out of the top of their car by Jaws of Life.

"They couldn't move and they didn't know if anyone was coming," Tony Vitello said. "At some point in between prayers, she said to my dad, 'We have to make that game tomorrow.' So of course my crazy-ass dad thought he was going to leave the hospital Sunday and go to the game."

Greg Vitello, a hall of fame soccer coach in Missouri, still is using a wheelchair and probably will need a knee replacement as a result of the accident, Tony Vitello said.

According to reports, the accident was caused when one of the trucks had a tire blowout on a slick road. Traffic on the interstate was stopped for nearly four hours while rescue crews worked to clear the accident scene.

Tony Vitello grew up in St. Louis and went to college at Missouri. His family still lives in the state and he knew they were en route to the game. Around the third inning he could sense something was wrong when he saw another sister, Katie, sitting alone in the stands.

"I never look in the stands, but I could just feel they weren't there," he said. "They're usually early. I did start looking and I saw my older sister sitting by herself. I felt the need after we got into the dugout to text my sister, 'Why are you scrambling around?' She said, 'I can't find Dad and Kara.'"

When he went back to the dugout he had another text. "They were in an accident," it read.

Vitello said he doesn't know why, but he went back onto the field the next inning. He nearly vomited in the third-base coaching box.

"I was crying my eyes out," Vitello said.

Arkansas coach Dave Van Horn said Vitello sprinted into the dugout when the inning was over, grabbed his phone and his backpack.

"I think he was a little stunned," Vitello said. "Like any circumstance, he's always understanding. He just asked, 'Is everything OK,' and I said, 'No.' I probably should have provided some more information, but I didn't want to create a big distraction, and also I wasn't thinking very clearly."

Tim Koch, father of Arkansas sophomore catcher Grant Koch, drove Vitello to the hospital. When he arrived his father and sister were bloodied, lying on backboards and wearing neck braces.

"I thought I was going to see them die," Vitello said. "To see them both alive was a big relief....It was a miracle."

Arkansas players gathered in the dugout to pray for the Vitello family when they heard the news. The game was tied 1-1 at the time, but the Tigers eventually won 7-2.

Van Horn saw images of the crash on a local TV newscast that night.

"If you saw pictures of the car, you would think there's no way anybody made it out," Van Horn said. "It's a miracle, really."

Vitello was back on the field for the third game of the series Sunday — a 9-8 Arkansas win to claim the series. He didn't travel home with the team that night, opting instead to sleep in his dad's hospital room. He didn't return to Fayetteville until late Monday.

"For them to survive that thing was the only win I needed that day," Vitello said.