Rawleigh Williams and family to meet with UA coaches, doctors 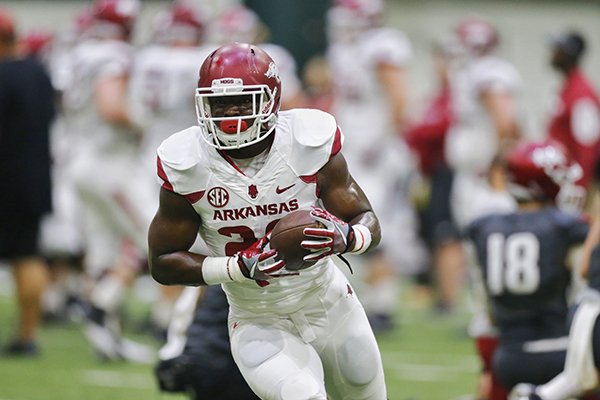 FAYETTEVILLE — Tailback Rawleigh Williams and members of his family will huddle with the University of Arkansas, Fayetteville medical team and Coach Bret Bielema this week to go over his latest medical tests and discuss his future, a source with knowledge of the situation told the Arkansas Democrat-Gazette on Tuesday.

University officials expect to make an announcement on Williams’ status at some point next week, the source said.

Williams, a junior who rushed for 1,360 yards in 2016 in his comeback from surgery on Oct. 24, 2015, to replace and fuse a ruptured disc in the upper part of his neck, suffered some type of neurological injury in Saturday’s spring practice finale.

Williams made “thud” contact with defensive end McTelvin Agim on a nontackling run play at left tackle, fell to the turf and said “I can’t move,” according to Agim.

Williams’ parents, Rawleigh and Kim, and his younger brother Brian and sister Alyssa came onto the Walker Pavilion turf as medical personnel cut off Williams’ jersey and carted him off into an ambulance.

Bielema said Kim Williams was “emotional, as a mom would be. He had his whole family in there today. They were all in my office, maybe an hour before practice, not just discussing Rawleigh but there’s also another little one [Brian] that’s a pretty good player as well. So we were having a conversation about the future just about an hour before practice.”

Williams has undergone more medical testing since the Saturday incident, which UA officials said medical personnel described as a “stinger.” Williams had the feeling back in all of his extremities while he was on the turf and said he was “embarrassed” at not being allowed to jump to his feet.

Williams has sent out two Twitter posts since the injury.

On Sunday, he wrote that he appreciated all the thoughts and prayers from fans and asked people to continue to pray for him and his family.

On Monday evening, he retweeted a post from former LSU running back Leonard Fournette, the No. 4 pick in this year's NFL Draft by the Jacksonville Jaguars, which read, “Dark times teach you a lot, that’s why you can’t regret what you went through, but rather be thankful for all the lessons it taught you…..”

Bielema said Saturday he could not comment further on Williams until he knew more about what medical tests revealed.

“That’ll be the No. 1 priority,” he said. “We’ll evaluate what the medical people tell us, and then we’ll have a conversation together and only do what’s right for Rawleigh.

“That’s probably the part of my job — everybody says, ‘What keeps you up at night?’ Those are the things that keep me up at night, just my players’ well-being. So we’ll cross that bridge when it comes.”