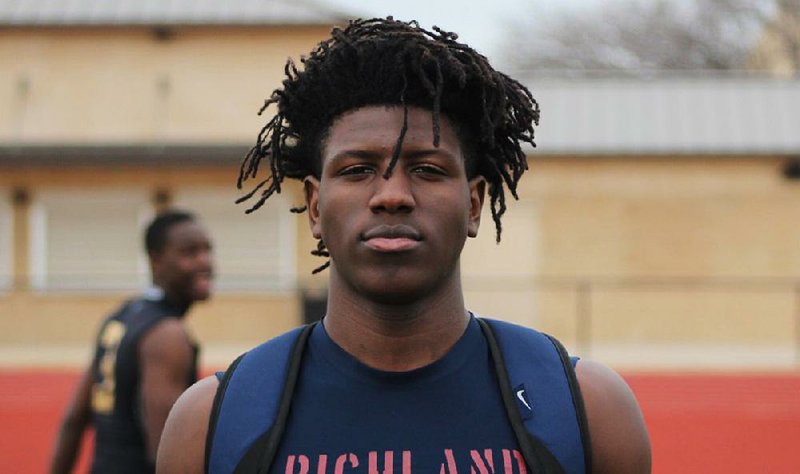 The heavy rains in Northwest Arkansas on Saturday didn't deter linebacker DaShaun White and his mother from having a good time as guests of Arkansas Razorbacks football Coach Bret Bielema and his staff.

"I like his whole vibe," White said. "He's different, he's really different. He's really upbeat. He was out there running around with the players, and I liked that a lot. He's not like every other coach."

White, 6-1, 210 pounds, 4.56 seconds in the 40-yard dash, of Richland High School in North Richland Hills, Texas, received a scholarship offer from the University of Arkansas, Fayetteville during his visit to go along with ones he has from Texas A&M, Oklahoma State, Arizona State, TCU, UCLA, Ole Miss and others. Oklahoma extended an offer Sunday.

White also said the distance to Fayetteville from his hometown is a plus.

"Arkansas is in a really good spot, not too far away from home, but at the same time, it's not too close," White said. "So I feel like I could get my mom out to all of the games comfortably."

White recorded 130 tackles, 16 tackles for loss, 4 sacks, an interception and a forced fumble as a junior. His mother, Geniva Turner, appears to be comfortable with the idea of her son playing for the Razorbacks after spending time with Bielema.

"She liked it so much that once my friend made a joke on the way out about me committing, and she said, 'Oh yeah, that sounds good,' " White said. "She's only said that about two other schools."

While there were many positives about the trip, White said his mother wasn't too fond of driving through the Boston Mountains on Interstate 49.

"It was so bad on the way back, I was supposed to drive through the mountains. But I was a little tired, so she let my friend drive her car," White said. "Which I mean ... if you knew my mom, that's weird."

White said he plans to announce his top schools in two or three weeks, and he said the Hogs will make the cut.

Defensive line target Emmit Gooden made his first visit to Fayetteville and he said meeting with Arkansas Coach Bret Bielema was the highlight of the trip.

"I never knew a lot about him, but just to sit down and talk to him to see what kind of plan he has for me as a person and as a football player, that was just great," Gooden said.

Gooden, 6-4, 320, of Independence Community College in Kansas has approximately 15 scholarship offers, including ones from Arkansas, Alabama, Mississippi State, Missouri, Georgia and Louisville. He plans to graduate in December and enroll at his new school in January.

He was able to catch up with defensive lineman McTelvin Agim, whom he got to know during the recruiting process in high school.

"It was cool catching up and talking football, talking recruiting, talking Arkansas," Gooden said. "He just told me about the city, the school and the fans and the players."

Gooden said the trip helped the Hogs' efforts to sign him and he has hans to make return visits.

"Yes, it most definitely did," he said. "I'm glad Arkansas is within driving distance so I can just come anytime. It's 2 1/2 hours, so I'll make random trips and just hang out."

"I was actually on my phone, snap chatting and he snuck up on me and hit me on my back," Gooden said. "I thought it was somebody else thinking I was somebody else or something like that, and I looked back and it was Coach Rhoads."

Rhoads wasn't shy about telling Gooden where he needs to be in the future.

"I actually got a chance to watch the draft with Coach Scott and see how it was in the NFL and see his outlook of things and watch some film of Arkansas this spring and some different ways for me to grow as a player," Gooden said.