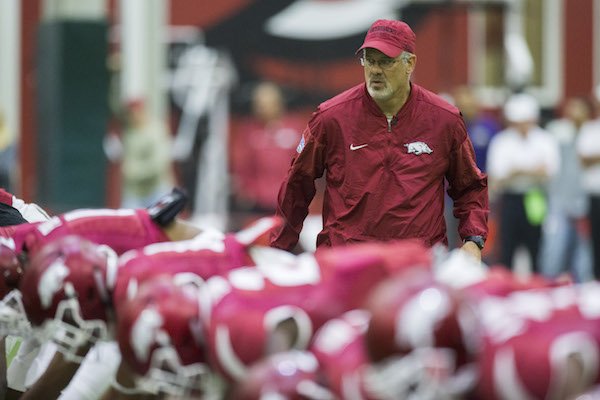 Condon, 6-7, 315 pounds, of Oklahoma City Bishop McGuinness visited the Hogs on April 1-2. He plans to make a return trip this summer before he makes his college decision. He also plans to visit Georgia again.

He said TCU is also a finalist while Texas could be if it extends an offer.

Highly recruited offensive lineman Jerome Carvin, 6-5, 330, of Cordova, Tenn., said he plans to visit Arkansas soon. He has offers from schools like Arkansas, Alabama, Tennessee, Auburn, Louisville, Ole Miss and others. Carvin visited the Hogs for the LSU game.

LSU is starting to show interest in junior point guard Shakur Daniel of Southwest Christian Academy in Little Rock. He plays for Pro Skills of Texas in the EYBL circuit.

Arkansas, Arizona State, Missouri and Iowa State are some of the others showing interest.

Highly recruited defensive back Joseph Foucha of McDonogh 35 High School of New Orleans said he plans to attend an Arkansas satellite camp being held in Hammond, La., in June. He has offers from the Hogs, Auburn, Alabama, Texas A&M and others.