Daniel Gafford injury to be evaluated by UA medical staff 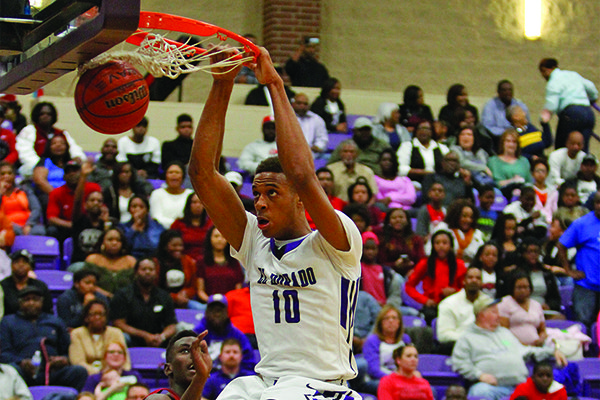 El Dorado's Daniel Gafford throws down a two-hand dunk against Texarkana on Saturday, Feb. 26, 2017, at Wildcat Arena in El Dorado. The Wildcats beat the Razorbacks 91-78 as Gafford totaled 34 points and 26 rebounds.

Gafford told WholeHogSports.com last week he planned to rest until the meniscus healed, indicating the injury wasn't severe. The 6-foot-11, 223-pound El Dorado native is a consensus top-50 recruit in the class of 2017, the highest-rated prospect in Arkansas’ three-man signing class.

“We'll get our medical people to take a look at him and see where he's at," Anderson said.

Gafford will arrive on campus this weekend ahead of the first summer school session, which begins May 30.

He is rated the No. 44 player in the 2017 class by ESPN and averaged 17.4 points, 16 rebounds, 7.7 blocks and 2.5 steals as a senior for El Dorado’s Class 6A state runner-up team. He will be counted on to help fill some of the void left by graduated All-SEC forward Moses Kingsley, who finished third in school history in career blocks and sixth in rebounds.