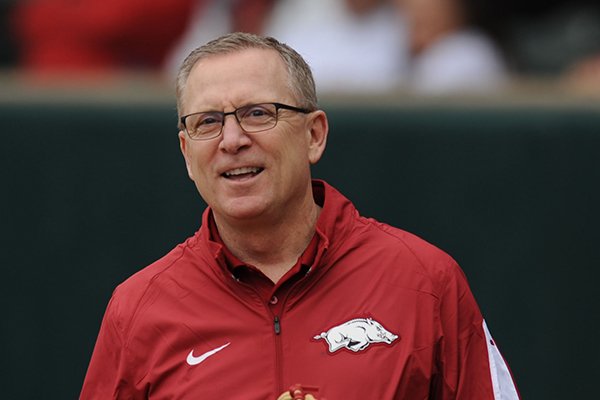 Arkansas director of athletics Jeff Long warms up before throwing out the first pitch against Miami (Ohio) Friday, Feb. 17, 2017, at Baum Stadium in Fayetteville.

Long, who will serve on the College Football Playoff Selection Committee through the end of the year, will assume a role on the NCAA Division I Football Oversight Committee in June. He will represent the Southeastern Conference on the committee and replace Mississippi State football coach Dan Mullen.

SEC commissioner Greg Sankey nominated Long for the position, which includes a four-year term that will run through June 2021.

“Jeff demonstrated effective leadership as chair of the College Football Playoff Selection Committee and his football knowledge and experience make him ideal for service on the Division I Football Oversight Committee,” Sankey said in a statement. “Jeff is a forward-thinking individual who will bring a balanced perspective to enhancing college football.”

Long previously has served on three other NCAA committees, including the NCAA Management Council. The playoff committee, which Long chaired in 2014 and 2015, is not directly affiliated with the NCAA.

“As a player, coach and administrator, college football has had a tremendous influence on my life and I firmly believe it continues to positively impact those who are affiliated with this great game," Long said in a statement. "I appreciate Commissioner Sankey’s nomination and am grateful for my selection."