State of the Hogs: Rhoads wants to make sure tape study right 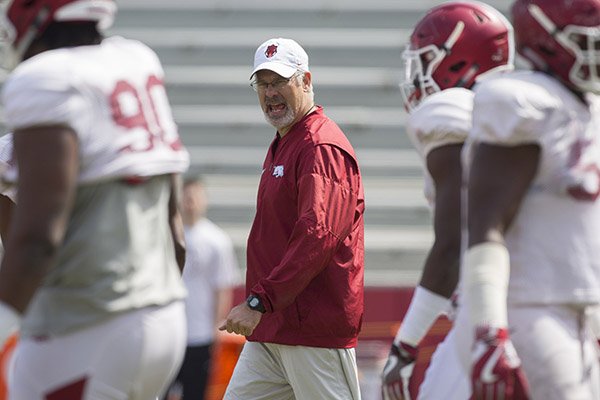 Arkansas defensive coordinator Paul Rhoads talks to players prior to a scrimmage April 8, 2017, in Fayetteville.

FAYETTEVILLE — The temptation to look at tape of elite players at your position is strong for Arkansas players. It happens, but it's not the favorite thing defensive coordinator Paul Rhoads wants his players to be doing this summer.

I found that an interesting tidbit as I went through player evaluations with Rhoads in the last week as the Hawgs Illustrated summer football preview was put to bed. It went to the printer Wednesday.

The subject came up when I mentioned that both Randy Ramsey and Dre Greenlaw have watched tape of stars elsewhere, perhaps playing slightly different techniques.

Ramsey told me during spring drills that he liked to study the pass rush techniques of Denver's star outside linebacker Von Miller. The former Super Bowl most valuable player is one of the most feared players in the NFL.

Ramsey is playing a similar position as an outside linebacker in the new 3-4 scheme Rhoads is installing at Arkansas. He's got a quick first step and should be one of the best pass rushers for the new look.

“I'm watching (Foster) this summer,” Greenlaw said. “I'm trying to see how he makes his run fits in this defense.”

Greenlaw said that's part of what he was told to do by Vernon Hargreaves, the Arkansas inside linebackers coach.

I mentioned that in passing as I went through the post-spring evaluations with Rhoads. He said targeted tape from UA coaches of elite players on other teams is sometimes good, but it also can lead to freelancing.

“I understand what Dre and Randy are doing,” Rhoads said. “There is so much tape out there that's available for our players that you can't stop them from doing it. You hope it matches something specific that we are doing.

“What you don't know is when they see something that is a specific blitz or call that doesn't fit what we are doing. So you have to be careful when you allow that kind of tape study. We know they are going to do it anyway, so we just have to cover it all with them.

“And you want them to execute our calls on specific techniques, not something else they've seen.”

I've seen players frustrate coaches in the spring, making plays outside the technique. A lost yardage play run outside the technique can build confidence in freelancing. Rhoads said junior college transfer Michael Taylor made some plays late in spring, sometimes from the wrong spot.

“If he doesn't make that play, it might be a touchdown because he wasn't in the right technique,” Rhoads said. “So that's why we want to get the techniques right. The calls fall together right then.”

“I think what he did sometimes was pure instinct,” Greenlaw said. “So maybe that will help me some. I know Coach Hargreaves thought it might.”

Greenlaw and Ramsey are two of the most natural playmakers on the Arkansas defense. Ramsey's ability to blitz in the 3-4 is one of the aspects that could change the fortunes of the team this season. He is perhaps the best fit in the new scheme. Greenlaw has been one of the top tacklers since forced onto the field as a true freshman.

“He's playing the same spot basically, the same as what the Sam linebacker or strong side was in the 4-3 in our base,” Rhoads said. “The thing now, we aren't going to take him off the field when we sub to our sub packages.”

Ramsey said, “I just flip sides when we go nickel or cash. So I stay on the field. I can rush or I can drop. I have cover skills. I was once a cornerback in high school, so I have that in me.”

Ramsey is a full-fledged outside linebacker now. He's a speed rush guy. He knows who to study at the next level, another 3-4 specialist.

"I really like the 3-4 because I model my game after Von Miller," he said. "That's the defense he plays in the NFL. I think it is going to allow me to make a lot of plays. I watch him in my tape study."

There is little doubt that Rhoads and the rest of the Arkansas staff think the Hogs will get better on defense with Greenlaw back. There is a great belief that the 3-4 scheme will help. He should be exposed to blockers in fewer situations. He's a solid tackler. His numbers could go up.

“If he can learn to read his keys right in this system, he's going to be running free from sideline to sideline,” Rhoads said of Greenlaw.

Greenlaw missed spring because of rehab from a second broken foot suffered during the bowl game. Greenlaw would have benefitted greatly from a spring in the new system. He did get lots of mental reps, helping coach the inside linebackers.

Rhoads thought the fact that Greenlaw was coaching the system – helping younger players learn – made his attention to detail grow. It was probably a help in a maturation process as a linebacker, something Greenlaw still needs after growing up as a safety in high school. He's just not as natural at linebacker.

“I’ve coached linebacker twice in my career and it became clear that there are just some that do and some that don’t understand linebacker,” Rhoads said. “Dre Greenlaw is one who doesn’t, although that’s not a knock because Dre can make plays.

“I think Dre can be scary good when we get him just a little further along as a linebacker. Like I said, I don’t think he truly understands the position yet.

“But he’s a natural playmaker, one of our best. We’ve got a few playmakers on our defense and it’s clear that Dre is one of them. Of course, he wasn’t practicing in the spring and we asked him to help us coach. I think that helped him mature. He needed that. He continues to grow up.”

Ramsey is one who has been on an accelerated path to stardom because of his growth as a person. There was once a time that he wasn't a student of the game or a student of anything.

That changed after he lost his scholarship for academic reasons, then earned his way back on the squad as a walk-on. Ramsey is a star on and off the field now. Rhoads lauded Ramsey's work in spring drills.

“This was a very productive spring for Randy,” Rhoads said. “There were a lot of positives. He has the ability to do everything you want at Razor. He’s still learning all the finer points of the position because it is a little different, but he came a long ways.

“I thought (outside linebackers coach) Chad Walker did a great job with him. He’s got strength and power and can really run. He can get off of the blocks from bigger guys.”

But they are likely to be among the handful of players who can be difference makers in the new defense. I'd add McTelvin Agim at defensive end, Ryan Pulley at cornerback and Santos Ramirez at strong safety to that list of playmakers.

That's just some of what you will find in the Hawgs Illustrated summer football preview. I was also interested in the thoughts from Dan Enos about the development of the tight end group. He sees the possibility that the Hogs get to his dream scenario of a balanced group with fewer specialists.

How many tight ends does Enos need to run all of his stuff in the Arkansas offense?

“You would like to get to the point where you have four,” Enos said. “If you have that and you really trust them to do everything, it makes it so much easier (to call plays). You can function so much better as an offense.

“So I guess four is the magic number we are hoping to get to this fall. If you can do that, it makes it tough on the defense.”

The hope is that the tight end group doesn’t come together just as a bunch of specialists, some who can block and some who can run routes or just be productive in the passing game.

“If you can do everything, it’s great and I think we are headed that direction with the tight ends,” Enos said. “What you don’t like is when the tendencies and the numbers show that players are going to be in the game for certain plays. That’s bad."

Enos said the ideal situation is to have multiple tight ends who are good in multiple areas, like in 2015 when Arkansas had Hunter Henry and Jeremy Sprinkle.

“That’s when our offense was really good," Enos said. "We could put both of them in the game at the same time and do about anything. It really puts the defense in a bind and makes them start guessing. It really made our offense go. We want to get to that point.

“We think we have a good tight end group. We’ll have Jeremy Patton, our junior college tight end, in here this summer. I think there is a lot of ability in our tight end room.”

The good news is that the Hogs can point to Henry and Sprinkle. They have plenty of tape of those guys running things the Arkansas way.

Maybe soon they can do that with their linebackers in the new 3-4. That's when things might be clicking for this new scheme being installed by Rhoads.