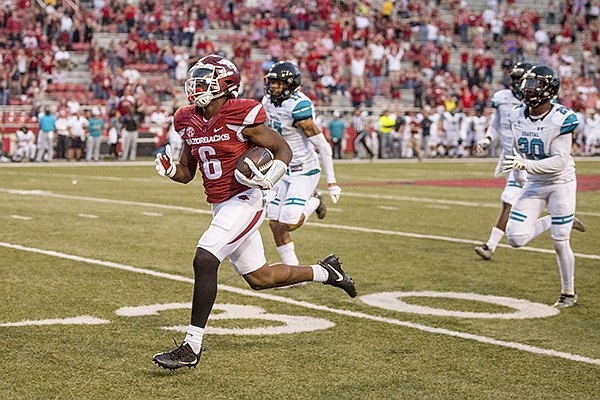 Arkansas running back T.J. Hammonds (6) runs for a touchdown during the fourth quarter of a game against Coastal Carolina on Saturday, Nov. 4, 2017, in Fayetteville.

FAYETTEVILLE — Folks in the Palmetto State probably know this, but I needed a Google search around 6 p.m. Saturday to get my bearings.

Why was it important? I wondered if the Chanticleers from Conway were about to pull an upset of similar proportion to what the Bulldogs of Charleston accomplished on Sept. 5, 1992.

It seemed relevant with Coastal Carolina cruising with a 38-25 lead and just a little more than 10 minutes left. The Chanticleers had returned a fumble for a touchdown, the way The Citadel scored the only touchdown in a 10-3 victory that ended Jack Crowe's time as UA head coach.

The Chanticleers – the chicken from Canterbury Tales – were about to do who knows what to Bret Bielema's time as head coach.

Actually, it was more like Bielema finally decided to make a fairy tale come true. He summoned Hammonds to replace Devwah Whaley after hearing that a stretch play was called, an outside run that fits his sophomore receiver-turned-running back.

Hammonds found a crease blocked perfectly by Austin Cantrell and Hjalte Froholdt, a clinching seal by tackle Paul Ramirez for an 88-yard touchdown drive that fueled the Razorbacks to a 39-38 victory.

The Hogs had to survive a Cantrell fumble one play ahead of the winning touchdown, a 1-yard keeper by quarterback Cole Kelley with 1:55 left. Right guard Johnny Gibson jumped on Cantrell's fumble, one of the few times that things seemed to bounce right for the Razorbacks.

It made Hammonds first choice for the interview room, even if he wasn't first choice out of the backfield for much of the day. Hammonds had led the Hogs in rushing in the 38-37 rally at Ole Miss last week, gaining 84 yards on 11 carries. Whaley and David Williams played ahead of him for the second straight week in the tailback rotation.

Hammonds didn't get his first touch until the 12-minute mark of the second quarter. He made 9 yards on a sweep and 60 on a screen on back-to-back plays to give the Hogs a touchdown.

Hammonds had eight touches for 179 yards. At just 5-10 and 195 pounds, he's not intimidating, until he plants his foot and accelerates. Then, the Little Rock product is electric. Both times it was a left foot plant, the side he's had so much trouble with this year, with knee surgery and foot bruise.

“That's what I call it, electric,” Williams said.

Williams was voted the winner of the Crip Hall Award, the outstanding senior in the Homecoming game. Hammonds didn't get an award, but he was the most valuable.

“That first screen pass was electric,” Williams said. “The last (touchdown) was a game changer. I'm proud of him. He's my roommate.”

Williams said defensive captain Santos Ramirez challenged the offense to make something happen just seconds before Hammonds took control of the game for the Hogs.

“Santos came into our huddle after they got the defensive stop and said, 'We been waiting on y'all!'" Williams said.

Ramirez made the defensive play to get the offense the ball back. He broke up a deep pass attempt when the Hogs in a no safety look on third-and-6. It was quite the gamble and paid off.

“I just jumped in their huddle and told them to do their thing,” Ramirez said. “Hammonds was the man to do it. I expect 100-yard games from him. He's got unbelievable potential.

“I am not in charge, but I think he needs more touches. The sky is the limit for that cat.

“He's got shiftiness and what he does can bring you energy. Football is so much about energy.”

Did the Hogs lack energy, or did the Chanticleers just bring more?

“I don't know,” Ramirez said. “But no way should a team like that come into our house and put up 38 on us. No way.

“It's a sigh of relief, but tomorrow we have things to fix.

“It's different to face an option team like that. The safeties have to play the quarterback runs and pitches. We couldn't help on the fades.”

The relief feeling was obvious. It was completely different from the emotions the previous week after rallying from a 31-7 deficit at Ole Miss.

“Yeah, we take a deep breath,” Bielema said of the feeling after beating Coastal Carolina.

“I understand it's a win, but I think you really have to look at the things we need to correct. I guess I'm a guy that's a glass half-full.”

Did the Hogs celebrate the Ole Miss rally too long?

“I get it,” he said. “I know people might say that. But I didn't feel that way during the week.

“Yes, last Saturday we had a happy group. But we cut our meeting short on the tape review (of Ole Miss). Maybe we over preached it.”

Unlike last week when the Hogs needed to run their two-minute for the winning drive, the Hogs huddled for their last two touchdowns, per Bielema's instructions.

It was Bielema who pulled back Whaley for Hammonds ahead of the 88-yarder, with instructions to run the offense in a patient manner.

“I made the decision to run our normal stuff,” Bielema said. “We wanted to be able to substitute.

“There was talk on the sideline to go no huddle. I said stay normal, huddle.”

That wasn't really a factor because Hammonds went the distance on the first play. There was only one huddle.

Hammonds said it's a play from his dreams, growing up as an Arkansas fan.

“Coach B just asked for me and said, 'Do what you do best,' and it was the stretch play,” Hammonds said. “Everyone (on defense) went all up and the blocking was perfect. I cut it up and it opened up.

“The next thing I thought, 'Oh my God, my legs are getting tired.' I looked up at the big screen and saw the guy catching me. But I knew if he got me, it was going to be at about the 2-yard line and I would get in. I just pulled that ball hard and tight to my chest.

“I was watching the linebacker. The tight end was in motion and he went over and back and the linebacker never moved. It was the outside zone or stretch and I thought I knew what was going to happen.

“It's an honor to do that. I'm from Arkansas and I've been a Hog all my life.”

Hammonds came to the interview room with eye black tape still stretched across his face. He said he decided not to shower until he got home.

“It's just been crazy,” he said. “I just haven't taken it off yet. I didn't even think about it still being there.”

There were surreal aspects of the night even for Hammonds.

“The screen pass that I caught for the first touchdown, I haven't run that before,” he said. “I hadn't practiced it, but it opened up and I stayed in-bounds. That was all I was thinking, just get to the daylight and stay in.”

Would he like more carries? He seemed to be ready for more in the post-game interview, with that eye black tape still in place.

“I'm here for whatever the coaches want,” he said. “That's not for me to decide.”

No, but when Hammonds got his touches, that was the deciding moment. He went coast-to-coast on Coastal Carolina.