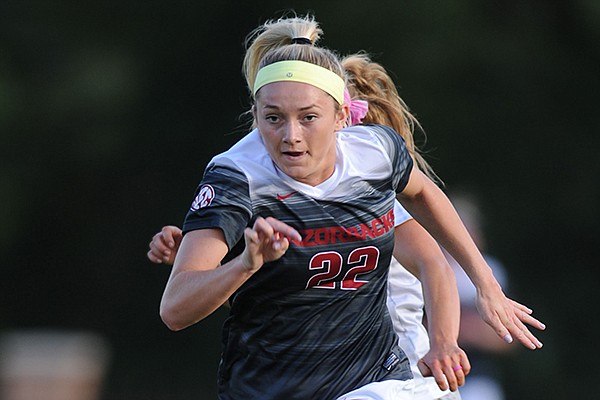 Texas A&M junior forward Emily Bates scored on a left-footed cross in the 88th minute to give the Aggies a 2-1 win over the Razorbacks in the tournament championship game in Orange Beach, Ala. Texas A&M won the tournament for the third time since joining the SEC.

Arkansas finished runner-up for the second consecutive season and for the fourth time since 1993.

"I thought we played well enough to win the game, but we're not a moral victory team and we didn't win," Arkansas coach Colby Hale said. "It stinks. It's probably one we'll need a day or two to recover from.

"The work they put in was super human, so I'm obviously impressed with that. I'm proud of some stuff, but obviously we came to win."

Bates' goal came seven minutes after Arkansas freshman Parker Goins scored to tie the game 1-1. Goins' team-leading ninth goal of the season was a long left-footed cross that went across a diving attempt by Texas A&M goalkeeper Cosette Morche and into the far top corner of the net.

Arkansas (11-10-2) nearly took the lead minutes later when Taylor Malham had a clean look at the goal with Morche out of position. But Texas A&M defender Briana Alston was able to block the attempt just in front of the goal line.

The Aggies led 1-0 at halftime after a sliding own goal by Arkansas' Tori Cannata, who was attempting to clear in front of the Razorbacks' goal in the 37th minute. It was the second consecutive game in which Texas A&M benefitted from an own goal, having won a semifinal game against Florida off an inadvertent header by the Gators in overtime.

"I feel like we always leave it up to the last second," said Texas A&M midfielder Mikaela Harvey, who was named the tournament's most valuable player. "I've never seen a team with so much heart."

The Razorbacks are expected to make the NCAA Tournament for the fourth time in five seasons when tournament selections are announced Monday. The SEC has had at least six teams in the NCAA field each year since 2011.

"We came together as a team and peaked at the right time," Hale said. "We got some performances that were pretty good. I can't imagine anyone is going to watch that game and think, 'Oh dear God, I hope we get the Razorbacks.'"