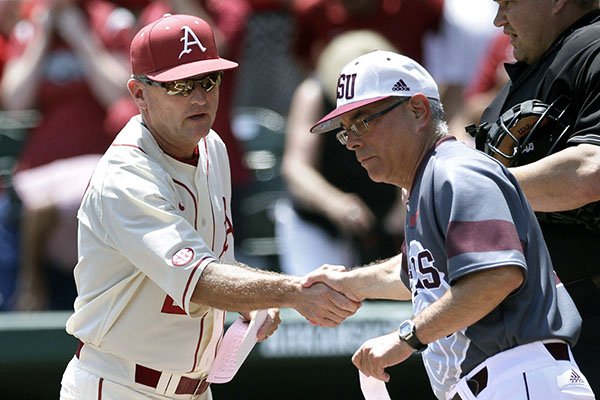 FAYETTEVILLE — When preseason baseball polls are released in a couple of months, expect Arkansas to be in the top 10.

If baseball schedules were ranked in the preseason, chances are the Razorbacks would be near the top of that poll, too.

Arkansas' 2018 schedule appears to be one of the more challenging ones assembled by 16th-year coach Dave Van Horn. It includes at least 25 games against 11 (mostly SEC) teams that made the NCAA Tournament a year ago. Those are:

Teams such as Bucknell, North Carolina-Charlotte and Kent State are contenders in their conferences, and Southern Cal has a great baseball tradition with 12 national championships, but none since 1998.

It is the type of schedule made the with the NCAA postseason in mind. On one hand, Arkansas could easily be a national seed with a strong record against the teams on its schedule. On the other hand, the Razorbacks will find favor with the selection committee simply for playing such a challenging slate. That would help in the scenario that Arkansas is on the bubble to host a regional, or in the more unlikely scenario that it is on the bubble to make the tournament.

The Razorbacks' 2018 prospects were bolstered when several notable players expected to go pro returned, but most elements of this schedule already were in place before the MLB Draft. More so than having the core of his 2017 team back, some regional host snubs in the past caused Van Horn to schedule more aggressively.

To give an idea of how far in advance schedules are put together, Van Horn said Monday that he already is working on the 2021 schedule. With that timing in mind, one could assume the Razorbacks' failure to host a regional in 2015 - the last time they advanced to the College World Series - played a role in Van Horn's more aggressive approach.

Some concessions were made to make the 2018 schedule a reality. Arkansas will host Southern Cal and Texas next season, but must return trips to those two teams in 2019. The Razorbacks also agreed to play in the Tony Gwynn Classic with the understanding they would be able to play at least once against Arizona, the 2016 national runner-up that also is in the field.

The brackets at the Tony Gwynn Classic have yet to be unveiled, but Arkansas and Arizona will play two days before the event begins, likely at one of the university fields in the city.

Here are some other notables on the Razorbacks' schedule for 2018:

Former Arkansas player Scott Heather is the coach at Bucknell, which will come to Baum Stadium for a three-game set to open the season in February.

Heather was a pitcher for former Arkansas coach Norm DeBryin from 1997-98 and later served on DeBriyn's staff as a graduate assistant. Heather also was an assistant coach at Arkansas-Fort Smith for five seasons.

In four seasons, Heather has ascended to second-place on Bucknell's all-time wins list. In 2014, he led the Bison to the NCAA Tournament, where they lost to Arkansas 10-0 in an elimination game at the Virginia regional.

The Razorbacks will play nine consecutive games away from Baum Stadium during an 11-day span in March.

During its spring break Arkansas will play twice at Charlotte before a three-game series at defending national champion Florida. The following week the Razorbacks will play a game at Memphis on their way to a Thursday-Saturday series at Ole Miss.

Those nine games will account for nearly half of the team's 22 games away from home, meaning there will be plenty of extended home stands. In fact, Arkansas will play 13 straight home games before the long road swing and will play 10 straight in the state of Arkansas after the Ole Miss series ends.

One consistency in Arkansas' schedule the last several years has been its play at professional ballparks.

In addition to its annual game at Dickey-Stephens Park in North Little Rock, the Razorbacks will play Charlotte at BB&T Ballpark on March 20 and Memphis at AutoZone Park on March 27. A second game against Charlotte will be played on the 49ers' campus.

Arkansas played six games at professional ballparks each of the last two seasons, including at Kauffman Stadium in Kansas City, Mo, and Minute Maid Park in Houston.

There was some thought the 2018 Tony Gwynn Classic championship game would be played at Petco Park in San Diego, but that no longer appears likely.

Florida, South Carolina and Kentucky return to the Razorbacks' schedule next season, while Arkansas plays Georgia for the second year in a row.

The out-of-division schedules are in place years in advance and have some built-in guarantees:

-No team will play another team from the opposite division more than two consecutive seasons.

-No team will go more than two seasons without playing every team from the opposite division.

-No team will go more than four seasons without playing an away series against every team in the opposing division.

Arkansas does not play Vanderbilt, Tennessee or Missouri in 2018, but will play all three in 2019 - Missouri and Tennessee at home, and at Vanderbilt. The Razorbacks also play at South Carolina in 2019, if scheduling patterns hold.

On the Road Again

Arkansas finishes the season on the road at Georgia, marking the seventh consecutive season the Razorbacks will play their final SEC series away from Baum Stadium.

Why is Arkansas continually put on the road at the end of the year? We're told it has to do with final exam schedules. The SEC makes every attempt to keep teams at home the week of finals and the UA has a finals schedule that is earlier than some other SEC institutions.

That is why the Razorbacks always play the next-to-last series at home, because it is the end of finals week. Simultaneously, being at home that weekend ensures that graduating players will be able to participate in commencement ceremonies.

The Razorbacks will play seven home games against teams that once were Southwest Conference rivals.

Arkansas plays Texas A&M every season, but Texas and Texas Tech both will be making their first trip back to Fayetteville since the early 1990s and their first ever trip to Baum Stadium. The Razorbacks last hosted the Longhorns in 1991 and the Red Raiders in 1990 - both at the old George Cole Field.

Arkansas is 2-3 against Texas since leaving the SWC, with the most recent matchup at the 2012 Houston College Classic, a Razorbacks win. The Longhorns beat Arkansas two of three times at the 2005 NCAA Regional in Austin, and Texas won a matchup at the 2004 College World Series.

The Razorbacks are 2-1 against the Red Raiders since leaving the SWC, with wins at the Houston College Classic in 2012 and 2016, and a loss in the 1995 NCAA Regional at Wichita State.