UA has record academic rate, behind others in SEC 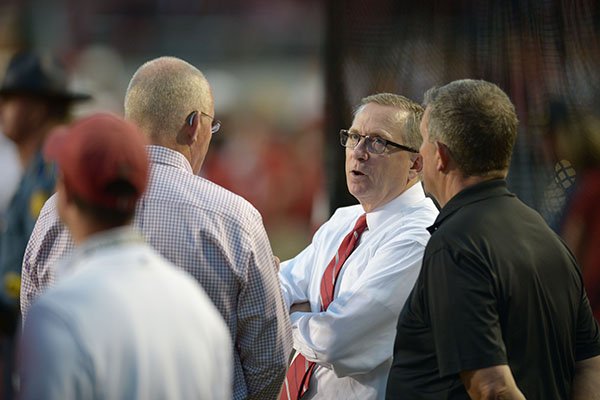 Arkansas athletics director Jeff Long is shown on the sideline during the Razorbacks' 52-20 loss to Auburn on Saturday, Oct. 21, 2017, in Fayetteville.

FAYETTEVILLE — Eighty percent of the athletes that enrolled at the University of Arkansas between 2007-10 graduated within six years, according to numbers released by the NCAA on Wednesday.

The 80 percent score was Arkansas' highest ever in the NCAA's Graduation Success Rate (GSR), but ranks last among the 14 universities in the Southeastern Conference.

GSR is a calculation of how many athletes graduate within six academic years of college enrollment. Arkansas’ previous GSR score was 78 last year and the latest score is 33 percent higher than the 60 it received in the NCAA’s first report in 2005.

In a release, Arkansas athletics director Jeff Long championed the findings in the latest GSR, stating his department has "worked purposefully to provide additional support and encouragement to assist" athletes over the past decade, and the department has "made tremendous progress."

The Razorbacks' two most profitable sports, football and men's basketball, recorded their highest scores in the GSR.

According to incentives outlined in their contracts, Arkansas basketball coach Mike Anderson and football coach Bret Bielema each will receive bonuses within 30 days because of the scores. Anderson will receive the maximum bonus possible of $100,000, while Bielema will receive a bonus of $25,000.

Neither coach recruited the players whose scores were reflected in the latest GSR, but both coached some of them early in their tenures at Arkansas.

Arkansas baseball had a GSR score of 65, which is nine points lower than last year's score of 74. The Razorbacks' 2007-10 freshman baseball classes included several players that were drafted to play professional baseball as sophomores or juniors, which likely had a negative effect on the program's GSR score.

GSR is one of two annual report cards issued by the NCAA to track academic trends in college athletics. The Academic Progress Rate (APR) is released each spring and focuses on athletes' eligibility and retention during four-year and single-year periods.