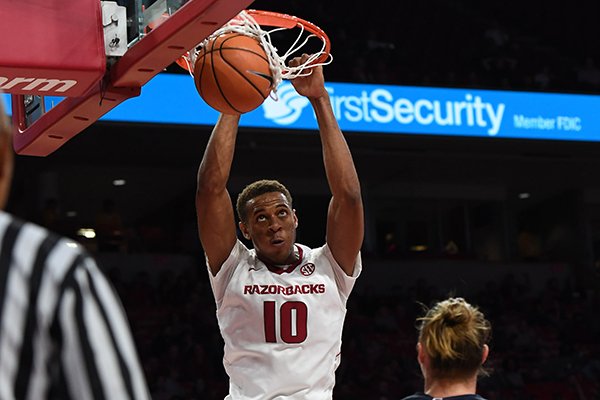 Arkansas center Daniel Gafford dunks the ball during a game against Samford on Friday, Nov. 10, 2017, in Fayetteville.

FAYETTEVILLE — After struggling to put away a pair of Division-II teams in the exhibition season, Arkansas had no trouble in the first game that counted this season.

The Razorbacks led by double digits for the final 35 minutes and cruised to a 95-56 win over Samford in front of 8,054 at Bud Walton Arena on Friday. Arkansas won its 23rd consecutive season opener and 44th straight home opener.

Arkansas made 57 percent of its shot attempts, due in part to several point-blank looks. The Razorbacks’ 36 made field goals included 12 dunks and nine layups. Arkansas had 28 assists.

KEY STAT Hogs had 28 assists on 36 made field goals.

UP NEXT Arkansas will play Bucknell on Sunday at 5 p.m. at Walton Arena.

“This was almost like an exhibition game for them, but not as tough,” Samford coach Scott Padgett said. “It was a good, old-fashioned punking.”

Arkansas trailed for a total of seven seconds. Adrio Bailey’s layup at the 16:45 mark of the first half gave the Razorbacks a 7-6 lead, the start of a 16-0 run that put the Razorbacks ahead 21-6 less than four minutes later.

Bailey, a sophomore forward, scored a career-high 15 points on 7-of-8 shooting. He was among Arkansas’ most aggressive players at the rim with 3 layups, 3 dunks, 8 rebounds and 2 blocks in 25 minutes.

“I guess you could call me a junkyard dog,” Bailey said. “I just know my role. I’m not trying to…do more than I’m capable of doing.

“I was just trying to hide from the defense and get lost the in the offense. My teammates…they made it easy for me. All they had to do was make the pass.”

Bailey was one of six Arkansas players to score in double figures. Daryl Macon and Jaylen Barford each scored 16 points, Anton Beard scored 14, and C.J. Jones and Daniel Gafford each scored 10. Gafford fouled out in his college debut.

Macon, who scored 11 of the Razorbacks’ first 16 points, also had eight assists, and Barford and Beard each finished with six assists.

“The passing was spectacular,” said Mike Anderson, the seventh-year Arkansas coach whose teams are 16-0 in season openers. “That’s exciting basketball. With this being one of my more athletic teams here, it’s good to see them get out in the open floor and make plays, and make plays for each other.

“If you look at the exhibition games, we didn’t get off to a good start, but it just seemed like our guys were dialed in tonight.”

Arkansas led 47-19 at halftime and opened the second half on a 10-0 run. Barford had the half’s first eight points with two 3-pointers and a layup after a steal.

The Razorbacks forced 19 turnovers and converted them into 35 points.

“In the second half we came out and I thought we really threw a blow at them,” Anderson said.

Arkansas’ defense held Samford to 32.8 percent shooting (20 of 61) and the Bulldogs made only 8 of 29 3-point attempts. The Razorbacks had seven steals and six blocked shots.

“I would say this whole game was a domino effect; we reacted to everything they did,” Padgett said. “They were the aggressors, they pushed the tempo, they got up in us and made us settle. This game went how they wanted it to go.”