In UA's view, War Memorial in need of $10M update 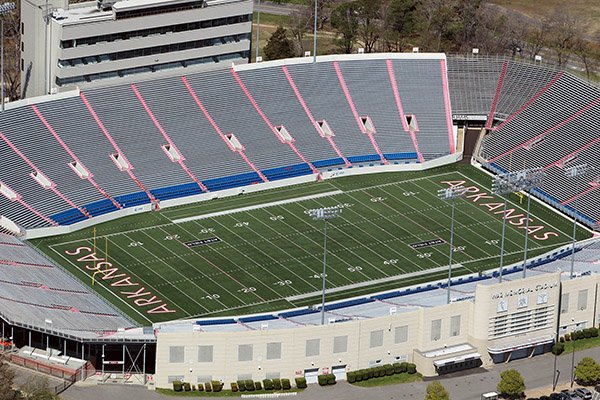 Little Rock's War Memorial Stadium is shown from the air during this 2014 file photo. The stadium, which opened in 1948, is in need of up to $10 million in renovations, according to figures provided by University of Arkansas officials.

FAYETTEVILLE — Up to $10 million in improvements are needed for War Memorial Stadium to continue hosting Arkansas Razorbacks football games, according to documents and emails exchanged between officials of the University of Arkansas and the Arkansas Department of Parks and Tourism.

The documents, obtained through an open-records request, detail several improvements UA officials say are needed to bring the stadium in line with fan demands, meet needs of TV partners and support potential changes to Southeastern Conference regulations. There is no record of any official recommendations pertaining to stadium upgrades.

UA has played annually at the stadium since it opened in 1948, but the Razorbacks’ future there is in doubt after a contract between the parties ends in 2018.

UA Chancellor Joe Steinmetz and Athletic Director Jeff Long made PowerPoint presentations regarding games at War Memorial Stadium to individual members of the UA board of trustees and Gov. Asa Hutchinson in late October, according to the documents. By presenting to individual UA trustees, UA officials avoided giving the presentation in a public forum, such as the regularly scheduled UA board meeting last week in North Little Rock.

In their presentations, UA officials discussed the pros and cons of hosting games at War Memorial. Among them are financial factors such as a $1.5 million difference in the five-year average of ticket revenue between games at Reynolds Razorback Stadium ($4.1 million) and War Memorial Stadium ($2.6 million).

UA officials have determined the average per-game net revenue at Razorback Stadium is $7.4 million, double that of War Memorial’s $3.7 million, and that the difference in net revenue for 2018 and beyond is projected to rise to $4.7 million per game. 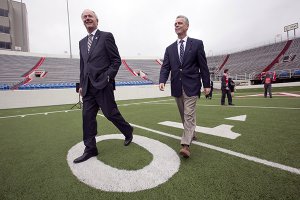 Reynolds Razorback Stadium is undergoing a $160 million expansion that will add about 4,200 club and suite seats by August 2018.

Hutchinson said in a statement that he “appreciated” meeting with Long and Steinmetz on the future of Razorback football at War Memorial.

“I expressed that I thought it beneficial for the Razorback program to have games in Little Rock,” he said. “I understand the need to upgrade the facilities, and that is a point of ongoing discussions.”

Kane Webb, director of the Parks and Tourism Department, also attended the meeting with Long, Steinmetz and Hutchinson. War Memorial Stadium was placed under the control of the Parks and Tourism Department earlier this year and the department has commissioned a stadium feasibility study with Frisco, Texas-based Conventions, Sports & Leisure that is expected in mid-December.

“I think the success of the War Memorial Stadium is important to central Arkansas and the state, and the Hogs have been a part of that, which is why we are in discussions to continue that tradition of a Razorback game” at the stadium, Webb said.

According to documents obtained through email exchanges between UA and the Parks and Tourism Department, the upgrades and renovations listed by UA as “immediate” concerns at War Memorial Stadium would cost between $1.4 million and $4 million and include:

— Improved WiFi and Distributed Antenna System connectivity at an estimated cost of $1.1 million to $3.25 million. According to documents, this is needed to improve cellphone usability throughout the stadium. It also would support an expected SEC rule change that would allow radio communication between quarterbacks and coaches, and the use of tablets on the sideline and in the locker room through fiber optics. The rule change is expected as early as next season, but more likely by 2019.

— Enhancements to broadcast TV infrastructure at a cost of between $250,000 and $500,000. This would address sky cam, lighting and power concerns for TV networks ESPN, CBS and SEC Network. 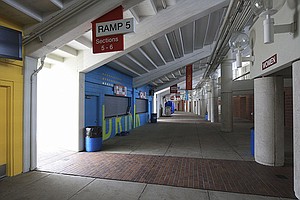 The stadium's concourses and restrooms are among many upgrades needed, according to UA. (Photo by Staton Breidenthal)

Renovations listed as “short-term” need by UA are between $1.5 million and $2.7 million and address connectivity between replay officials at the stadium and the SEC office in Birmingham, Ala.; replacing the stadium’s artificial turf, clock and sound systems; renovating the stadium’s public restrooms and concession stands; and improving event staff and parking management.

In addition, a working group of SEC athletic directors will review minimum requirements for football facilities, which could require $1.95 million to $3.3 million in upgrades, such as expanding the size of home and visiting locker rooms and team meeting spaces; providing secure access for teams to their locker rooms; additional security cameras and the establishment of a stadium command center; and dedicated postgame news conference rooms for home and visiting teams, according to UA.

Herb Vincent, an associate commissioner at the SEC, said Tuesday that “the working group is still being developed and therefore there have been no meetings of this group to date.” 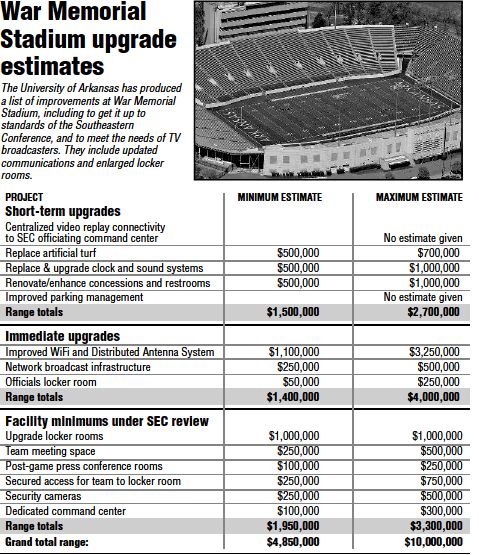 The 39-slide PowerPoint presentation by Long and Steinmetz addressed other factors in the debate between home stadiums, such as where ticket sales come from across the state at both venues, and a look at UA’s football tradition in the state.

The presentation noted the importance of the football team’s history in Little Rock, the stadium’s central location, and the “affirmation of UA commitment to serving the entire state.”

Additionally, the presentation pointed out that the “Razorbacks are the tie that binds the state together” and how playing games in Little Rock “renews memories of classic Razorback moments in War Memorial Stadium.”

It also pointed out that opposing teams use it for negative recruiting to dissuade candidates from going to UA.

That category notes that the Little Rock stadium “is characterized as an antiquated crumbling facility by our competitors,” that recruits “share they don’t like playing in a stadium primarily used by high school football teams” and are told by competing recruiters it is “the worst football venue in the SEC.”

According to UA, several regional and societal changes have occurred since the last major analysis of playing games in Little Rock in 2000, including the construction of Interstate 49 to Fayetteville, the significant increase in the number of hotel rooms in Northwest Arkansas, the proliferation of games on TV and game day expectations of fans.

 Long addressed the need for making a decision on games in Little Rock soon after a talk to the Northwest Arkansas Touchdown Club on Sept. 6.

“It doesn’t need to be made in a week or a month,” Long said. “It needs to be, hopefully, in my opinion, made in the course of this season so we can continue to schedule our future games.”

According to a restructured contract agreed upon in November 2013, UA must play an SEC opponent at the stadium next year, but the Razorbacks did not stipulate which opponent they will play there when the 2018 schedule was released in September. 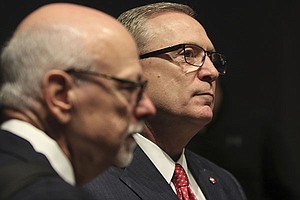 Jeff Long, right, and Joe Steinmetz presented to the governor and members of the UA Board. (Photo by Staton Breidenthal)

During a Sept. 29 email exchange, War Memorial Commission Chairman Kevin Crass wrote Long to ask whether Long had a timeline for making a decision on the 2018 opponent. Crass wrote that the commission had been informed of past opponents at least 12 months in advance of the next season.

On the same day, Long wrote Crass that the university was still in the process of making a decision. “I hope you can provide us additional time to make our decision,” Long wrote.

According to additional documents provided by the university, SEC rules require a mutual agreement between SEC teams participating at off-campus stadiums. UA has home SEC home games against Alabama, LSU, Ole Miss and Vanderbilt in 2018.

There has been an ongoing debate for nearly two decades about how many games UA should play in Little Rock as college football teams focus more on on-campus games and multimillion-dollar payout games at neutral sites, such as the Razorbacks’ annual game against Texas A&M in Arlington, Texas.

UA’s PowerPoint presentation notes that the Razorbacks are the only SEC program that plays home games at multiple sites and that SEC West rivals Alabama, Auburn, Ole Miss and Mississippi State ended their practice of playing home games in large regional cities such as Birmingham, Ala., and Jackson, Miss., between 1990 and 2003.

The Razorbacks have not played an SEC opponent at the stadium since a 45-32 loss to Georgia in 2014. UA’s last two games have been against Alcorn State and Florida A&M of the NCAA’s Football Championship Subdivision, a step down from the Football Bowl Subdivision in which the Razorbacks are a member.

The seating capacity at War Memorial Stadium is 54,120, but an announced attendance of 36,055 was on hand for the Razorbacks’ season-opener there against Florida A&M on Aug. 31.

Information for this article was contributed by Michael R. Wickline of the Arkansas Democrat-Gazette.