Will Hogs have enough perimeter shooting? 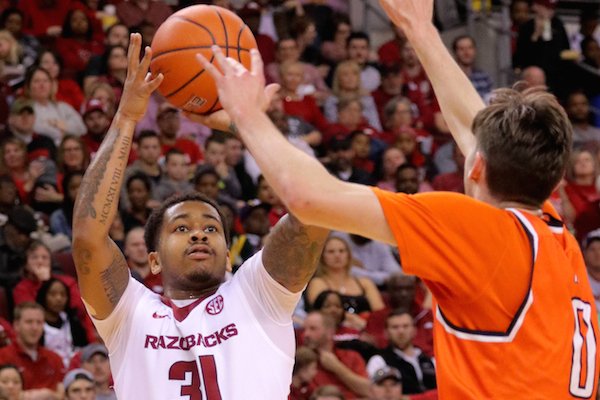 Arkansas' Anton Beard puts up a shot during the second half of a game against Sam Houston State on Thursday, Dec. 22, 2016, at Verizon Arena in North Little Rock.

It’s not necessarily ideal. As basketball in general trends more toward valuing 3-point shooting, Arkansas is coming off a season in which it took less 3s than 91 percent of other Division I programs: attempts from beyond the arc comprised just 29.5 percent of the Hogs’ shot selection a year ago, putting it 321st out of 351 teams. To put it in perspective, the national average was 36.4, the highest in NCAA history.

That data can be interpreted a few different ways.

Maybe the Razorbacks were more selective about taking good 3-point shots, which is why they ranked so high in percentage. After all, the San Antonio Spurs ranked 24th out of 30 NBA teams in percentage of shots that came from 3-point range last year (28.1), but led the league in percentage (39.1) because they have disciplined veterans and good shooters who largely took open looks.

But Mike Anderson teams have ranked near the top of the league in 3-point attempts in the past and selectivity doesn’t appear to be the reason Arkansas ranked near the bottom of the nation last year. Dusty Hannahs, Daryl Macon and Jaylen Barford regularly took high-degree-of-difficulty shots, an eye test the numbers bear out. And they made a good portion of them, because they’re capable to great shooters.

The Razorbacks’ ability to knock down 3s shots lessened the gap at the arc between it and other teams — despite ranking 13th in attempts last year, the Hogs were 8th in makes. But graduating Hannahs, who shot 38.7 percent from deep to rank fourth in the SEC as a senior, means there’s no guarantee the Hogs will again be one of the better-shooting teams in the league.

Being an average-shooting team who struggles to generate good looks from 3 will at least somewhat impinge the upside of any offense, even one featuring studs like Barford and Macon. Several of of the Razorbacks’ 3 incoming freshmen, particularly Darious Hall, have shown signs of being solid shooters, but none proved they could consistently stretch the floor in high school.

Having enough adequate shooting threats will be important. It likely comes down to a few factors:

Arkansas ranked last, yes, last, in the SEC last year at generating open catch-and-shoot jumpers, according to Synergy Sports tracking data. That’s why the idea that the Razorbacks, like the Spurs, only pulled the trigger on good looks doesn’t hold up.

They attempted an average of just 4.2 unguarded jumpers per game in their halfcourt offense, a mark worse than Missouri, LSU and everyone else in the conference.

The Razorbacks’ backcourt was stocked with gifted offensive players. Barford, Macon and Hannahs could create shots for themselves at any moment and most of the time that strategy worked well.

But the team didn’t always do a good job setting each other up, making the extra pass or working in unison to apply the motion tenets Anderson wants to play with in order to free each other for good looks.

For the season, the Razorbacks ranked 221st in the nation in assist percentage and were just eighth in the SEC during conference play. Finishing near the top of the league in 3-point percentage and offense was a testament to the talent on that side of the ball. The relative lack of attempts was likely at least somewhat a casualty of the sometimes stagnant ball movement.

That got better later in the season as Macon and Barford grew more acclimated to the system and were more willing to screen and cut off the ball to free themselves and others up. Anderson’s system allows for a lot of player freedom, but players have to be willing to work off of each other and do stuff like set a back screen, sprint into cuts off the ball and turn down a good shot in favor of a better one for a teammate after drawing the defense. That can seem tedious, but it results in easier looks than isolations if everyone is willing to execute.

Sans Hannahs, Arkansas will have to share the ball more consistently to create better looks. Penetration-kick-swing-open shot sequences were few and far between last year, but Macon and Barford both have the ability to set those up and the hope is they’ll be more willing to do it on a consistent basis this year.

Adjusting to losing one of the best shooters in school history won’t be easy, but better and more willing passing is a good place to start.

Can Daryl Macon follow up his strong junior year with a similar senior season?

Macon, like Hannahs, shot 38.7 percent from 3, a good number that becomes even more impressive considering the difficulty of a good chunk of his shots. He is very skilled at creating space off the bounce to let it fly from beyond the arc, especially when he wiggles into little hesitation dribbles. It’s an ability that will probably be even more necessary this season given he is the only proven knockdown shooter on the roster.

He’ll have to learn how to deal with the added attention. The good news is he has a pure shot. Shooting 86.6 percent from the line doesn’t happen by accident. Macon will score a ton of points this year and have a chance to be near the top of the SEC leaderboard in 3-point makes.

His efficiency might dip a bit with the added workload and attention, but that’s OK. He will have the green light and can’t be shy about hoisting up shots. Finding a way to free him for at least 6-7 decent looks would help Arkansas’ offense greatly. Heck, 8-10 attempts a game isn’t crazy.

Will Jaylen Barford be an improved shooter?

The potential is there.

Like Macon, a decent percentage of Barford’s 3-pointers were heavily contested. Unlike his fellow senior guard, he didn’t convert at a high clip. Barford shot just 26.6 percent from 3 on a solid 3 attempts per game.

One reason for the ugly percentage was the quality of shots he took or in some cases had to take. Barford often wound up with the ball in his hands on the perimeter with the shot clock running down, situations in which hoisting a jumper is the easiest decision. He only made 4 of 30 jumpers with less than 4 seconds on the clock, an abysmal percentage that dragged down his efficiency.

But he is a solid free-throw shooter (75.2 percent) and shot a respectable 35.5 percent from range on 4.4 attempts per game in his last JUCO season. The key for him will be generating better looks. If he can do that and make around one-third of his 3s, that would go a long way.

Does C.J. Jones have the capability to fill some of shooting void left by Hannahs?

Whether he does it is another question, but Jones has a pure stroke, plus the size (6-5) and athleticism (arguably a top-2 athlete on the team) to get his shot off with ease. He proved that in limited minutes last year, making half of his 24 attempts.

Jones has a scorer’s mentality that, along with his physical gifts, give him one of the highest ceilings on the team. He isn’t the shooter or all-around scorer Hannahs was yet, but there’s no shame in that. Playing next to veterans like Barford and Macon who will command defensive attention should help free Jones for open bombs.

If he can hit a good percentage, say somewhere in the high 30s, he will be a valuable floor-spacer. Anything more than that and he becomes a key cog who will be near the top of every SEC program’s scouting report.

Can others step up as viable options?

Anton Beard bounced back last year and shot a respectable 35.6 percent from 3 after dipping to 28.8 as a sophomore. But he isn’t really a volume shooter from deep: he only attempted 2.5 per game as a junior and has never cracked the 3-attempt-per-game mark in his career. It would help if he shot a similar or slightly better percentage with an uptick in attempts. He’s put in work over the course of the offseason for his final go-around.

After Beard, it gets dicey. There simply aren’t many other shooters on the roster.

Freshmen wings Khalil Garland and Hall have made strides in the department, but the onus will be on them to prove they can shoot to opposing defenses. Garland’s status is still up in the air.

Freshman forward Daniel Gafford is not a shooter at this point, one striking difference between he and Moses Kingsley’s game. Kingsley developed a shot over the course of his career and shot 43.8 percent on a limited number of 3s as a senior.

Arkansas has had a few very good high-end shooters the last few years, but not much after that. Lagging behind the national norm boils down to two aspects, really: not creating a ton of open looks and a lack of shooting bigs. It is the culprit for why the Hogs haven’t taken advantage of the 3-point line like other teams the last few seasons.

Here are the bigs’ 3-point shooting numbers and the team’s total numbers over the course of the last 4 seasons:

The correlation is apparent and the crux of why Arkansas has lagged in a game trending toward perimeter shooting. While the Razorbacks have had a few high-volume 3-point shooting guards, its lack of floor-spacing bigs has been a driving force behind the dip in 3-point attempts the last few years.

The Hogs’ court balance has suffered a bit as a result. Anderson teams have greatly benefited from stretch bigs and combo forwards who can shoot the rock in the past, but that’s been absent the last 2 years and may be missing again this season.

Brachen Hazen was the best shooter among the bigs, but transferred in May. His ability to stretch the floor could have allowed the Hogs to truly play 4-out basketball open the floor up for Macon and Barford, but he faced an uphill battle to earn playing time in the immediate future.

Hall may operate as a 4 in some lineups, but his shooting, while showing some positive signs, is a work in progress. Both Thomas and Cook struggled mightily with their jumpers last year. Thompson flashes a solid jumper he can reportedly hit to 3-point range in practice, but that hasn’t carried over to games yet. Maybe he and Thomas take that step this year.

Odds are, Arkansas will again be without a floor-spacing big in 2017-18. That coupled with Hannahs’ departure puts the pressure on guys like Macon and Barford to suck the defense in with drives and create looks for their teammates.

More than likely, Macon, Jones, Barford and Beard will have to shoulder bulk of the shooting load. That’s not a bad quartet and could lead to Arkansas again finishing near the top of the SEC in percentage, but it may not be enough to produce a sizable jump in the volume of attempts.

The Razorbacks were one of the best offenses in the nation without being a high-volume 3-point shooting team a year ago and two of the main catalysts return. Whether they can repeat that accomplishment with a similar set of circumstances will be interesting to track.