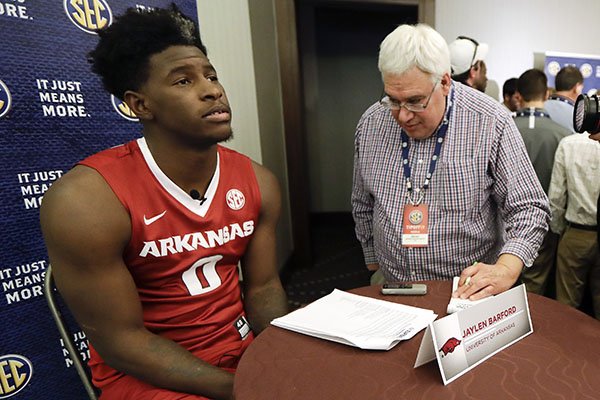 NASHVILLE, Tenn. -- Daryl Macon isn't shy about saying what he believes he and fellow Arkansas Razorbacks senior guard Jaylen Barford can do this season.

"We're going to be one of the best backcourts in the country," Macon said Wednesday at SEC basketball media day. "We don't get the respect we should, but we've just got to make sure we keep working and lead this team to another successful season."

Why is Macon so confident in himself and Barford?

Macon and Barford were keys in the University of Arkansas, Fayetteville returning to the NCAA Tournament after finishing .500 the previous season.

"Normally it takes a junior college player maybe a year to find that groove," Razorbacks Coach Mike Anderson said. "I thought Daryl and Jaylen were the exception, and that was big for our program."

Macon scored a season-high 30 points in Arkansas' 98-80 victory over Ole Miss, hit three free throws in the final 1.6 seconds left when the Razorbacks won 71-70 at Vanderbilt and scored a team-high 19 points in a 72-65 loss to North Carolina in the NCAA Tournament.

Barford scored a career-high 23 points twice -- at Missouri and South Carolina -- and had 20 points in the Razorbacks' 77-71 victory over Seton Hall in the first round of the NCAA Tournament.

"I don't think anyone can stop us," Barford said of the chemistry he has with Macon. "We play off each other, feed off each other and motivate each other.

"We push each other every day in practice. When we get on the court we tell each other, 'It's go time.' "

Anderson was asked whether he agrees Macon and Barford are one of the nation's top guard duos.

"Daryl and Jaylen feel good about themselves," Anderson said. "I think they're very confident in what they do. It remains to be seen what happens. I think on paper it all looks good and sounds good, but it's just opinion at this point.

Macon and Barford both entered their name into the NBA Draft earlier this year, but they didn't hire an agent and retained their college eligibility and after receiving input from pro coaches and scouts. They decided to return to Arkansas.

"It was a great process," Macon said. "I actually did it to get feedback so that I could come back and improve my game, and hopefully get drafted after this season.

"The feedback I got was to become a better leader with the team and improve my body."

"Gaining the right weight is important in this game, especially in this conference, because it's very physical," Macon said. "You've got to be able to stand your ground.

"I feel a lot stronger now, and that helped me spend a lot of time in the gym over the summer trying to get more consistent on my shot and other parts of my game."

Barford, 6-3 and 209 pounds, said he's worked hard to improve his perimeter game after he shot 26.6 percent (29 of 109) on three-pointers last season. He also wants to be better with the ball after having 72 assists and 71 turnovers.

"This year things are slowing down," Barford said. "I've got a feel for everything in the SEC now, so I think I'm going to be all right."

Barford has no concerns about his ability to drive aggressively to the basket.

"I think I'm the best guard in the country in the open floor," he said.

Pat Bradley, a former Arkansas guard who is an SEC Network analyst, said he loves how Macon and Barford play.

"I think they're extremely interchangeable, which is a big advantage," Bradley said. "Both of them can play the point or play the off guard.

"We know how well Daryl can shoot, and Jaylen is improving his jump shot."

Bradley said Macon and Barford's defense is a plus, too.

"To me, it's all about getting after it, and both Jaylen and Daryl proved last year they're willing to defend baseline-to-baseline and rotate," Bradley said. "They understand those things."

Macon said he and Barford are both comfortable handling the ball.

An SEC media poll listed 12 players on two all-conference teams, but no Razorbacks.

"I mean, it is what it is," Macon said of the Razorbacks being snubbed. "But that's just someone's opinion. They're not out there on the floor playing us. So I try not read too much into it.

"I can't say I'm shocked, but it's basketball at the end of the day. You've still got to go out there and play. That list doesn't mean anything."

Macon was asked whether he expects himself or Barford to be on an All-SEC list after the season.

"How about we just wait and see," he said with a smile. "Give us a chance to show people what we can do."