Chase Hayden out with lower-leg fracture 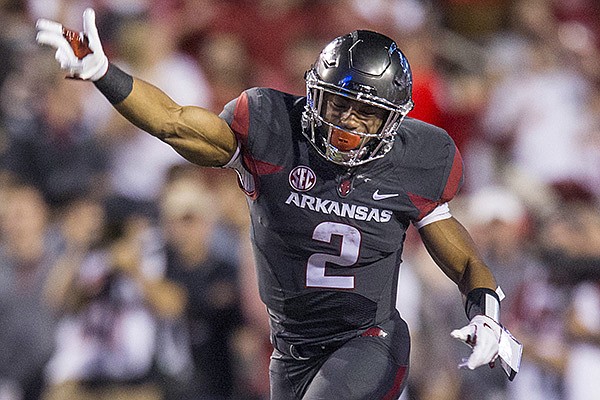 Arkansas running back Chase Hayden signals first down during a game against Auburn on Saturday, Oct. 21, 2017, in Fayetteville.

FAYETTEVILLE — Freshman running back Chase Hayden will miss 4 to 6 weeks after sustaining a lower-leg fracture in Arkansas' 52-20 loss to Auburn on Saturday.

Hayden sustained the injury on a career-long 40-yard run during the second quarter. He limped off the field and didn't return to the game. The injury doesn't require surgery.

"It'll put him out for our regular season," Bielema said.

Hayden's explosiveness and big-play ability have been evident at times despite playing behind a struggling offensive line. His 326 rushing yards are tied with senior David Williams for the team lead and his 5.3 yards per carry are tops among the Razorbacks' three main running backs.

Without him, Williams and sophomore Devwah Whaley remain as Arkansas' top backs. Sophomore T.J. Hammonds has been limited by injuries, but will move back to running back full time to add depth. Offensive coordinator Dan Enos said he would get carries Saturday at Ole Miss.