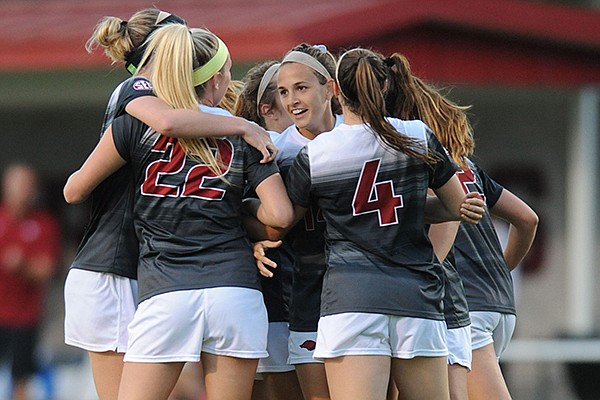 Arkansas players celebrate a goal during a game against Penn State on Friday, Aug. 25, 2017, in Fayetteville.

Arkansas upset No. 3 South Carolina 1-0 in the quarterfinals of the SEC Tournament on Tuesday in Orange Beach, Ala.

The Razorbacks (11-9-1) will play Vanderbilt (12-6-1) in the tournament semifinals Thursday at 3:30 p.m. The Commodores, who finished fourth in the SEC during the regular season, defeated Tennessee 1-0 in the quarterfinals.

Tori Cannata scored the game's only goal - and her first of the season - off a deflection in the 53rd minute. It was one of only three shots for Arkansas, which was out-shot by 17 attempts.

South Carolina (15-2-1) had several chances to tie the game late, including a shot from Luicano Zullo that went off the crossbar with 43 seconds remaining. Arkansas goalkeeper Jordan Harris also had one of her three saves in the final minute.

The Gamecocks, the regular season champion in the SEC, had defeated Arkansas 2-0 on Oct. 8 in Fayetteville.

The Razorbacks entered the day ranked No. 50 in the NCAA's RPI, but figure to move up with the win. The winner of the SEC Tournament will receive an automatic bid to the NCAA Tournament, which begins next Friday.

Arkansas entered the SEC Tournament as the No. 8 seed. The Razorbacks defeated Ole Miss 1-0 on Sunday.