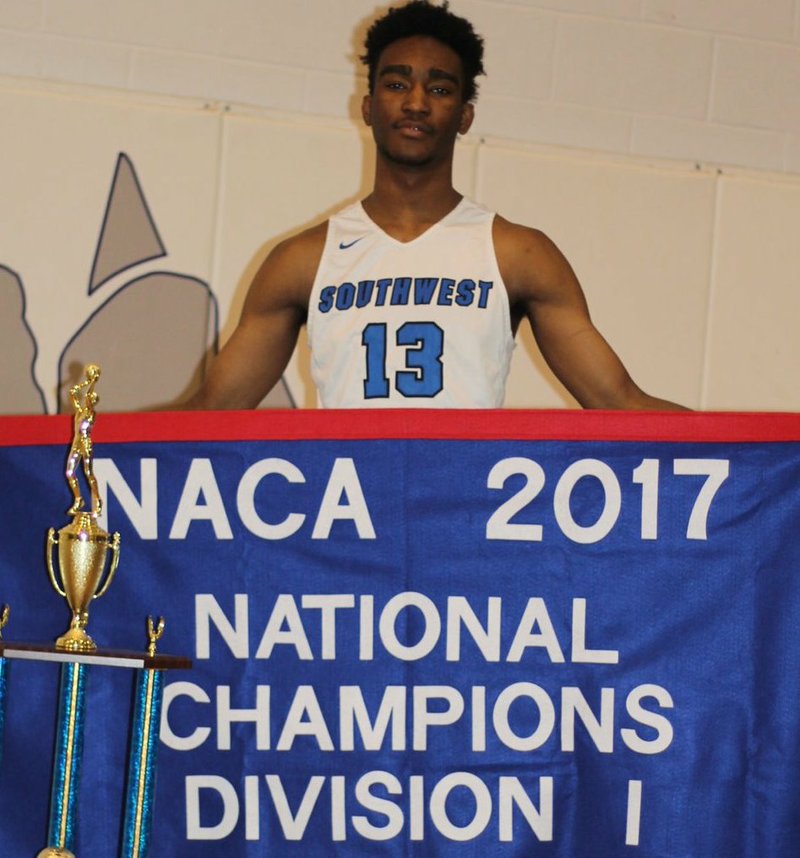 LITTLE ROCK — Southwest Christian Academy in Little Rock had an outstanding 2016-2017 season and won the National Association of Christian Athletes championship in February.

Coach Charles Baker believes the Lions will be more talented this coming season.

“We’re a lot longer this year,” Baker said. “We’re a lot deeper, a little more athletic. We shoot it and dribble it and pass it a lot better.”

The Lions went 31-2 last season and had four players sign with Division I schools, including forward Gabriel Osabuohien with Arkansas.

“He’s lightning fast with the basketball, can shoot it," Baker said. "He makes great decisions.”

It was expected scholarship offers would come his way during spring and summer basketball, but an injury most likely ended his chances.

“He pulled a hamstring two days before the EYBL season started, and I tried to get him not to play, but he felt like he couldn’t pass it up,” Baker said. “He was out there on one leg all spring and summer, and the more he played, the worse he got. He’s thinking, 'Well, you know, at least they’ll know I’m trying to fight through it,’ and I was trying to explain to him they don’t even know you’re hurt.”

Daniel is 100 percent healed and is expecting a big year.

While Baker believes Daniels is the best player in the state, he thinks newcomer and senior guard Jahbril Price-Noel (6-7, 203) is his competition for top player in Arkansas.

“He can really shoot it and score from all over,” said Baker of Price-Noel, who is from Toronto. “He has a high IQ, a high skill set — can really pass the ball, can handle it, can shoot it. He’s going to be a big addition this year.”

“He’s real long and athletic,” Baker said. “Here’s the thing about Tim: He’s a good player right now, but he has no idea how good he can be. There is no ceiling right now. When he learns to play a little harder and [pushes] himself, he’s got a chance to be really, really good.”

“He’s a real explosive scorer,” Baker said. “He can shoot it from all over the place and get by anybody.”

Several new big men have been added to the roster. Baker is expecting big things from senior forward Ivan Hadzic (6-9, 237) of Serbia.

“He’s a strong kid with a high skill level,” Baker said. “He can shoot it deep from the perimeter. He can really post up well, moves well. He’s well put together. There’s no fat on him. He really knows how to play. He understands angles.”

Forward Akol Mawein (6-9, 207) is a junior from Australia with the ability to handle the ball and pass it while senior Simeon Jovic (6-9, 207) of Serbia is an athletic forward that can run the floor.

“He can get to the goal whenever he wants,” Baker said of Mawein. “When he gets a rebound, everybody just takes off because he doesn't have to outlet it to anybody. He can go through traffic with it. It’s just special to watch him move. He’s a high level SEC, Big 12 type player, too.”

Baker sees Jovic being a big man with guard skills.

“He plays off the dribble really well,” Baker said. “He can get by people. He’s got a chance to be really good.”

Sophomore power forward-center Nick Ongenda (6-10, 177) of Canada is on the thin side but has good upside.

“He has a nice skill level,” Ongenda said. “He can shoot the ball and runs the floor real well. He tries to block everything. He’s real active. He’s ridiculously long.”

“Last year we ended up with about six players that you could count on to play against high level competition,” Baker said. “This year it’s going to be about 11. I think most of these guys — they’re going to get more from practice than games, to be honest.”

Baker said senior guard Malik Kennedy (6-5, 177) of Scarborough, Ontario, is the second-best athlete on the team behind Ceaser.

“He can really score it and plays off the dribble and gets to the rim,” Baker said. “He’s an SEC talent. He just needs to learn how to play the game, but he can be fun to watch when he gets it going.”

“He played in the Serbia national team,” said Baker of Stojanov. “He led the European championships in assists.”

Anderson is one of the returners from last year’s squad.

“When Cole plays athletic and he really plays hard, he’s got a chance to be really effective,” Baker said.

Baker is excited about Brekic’s future.

“He’a a high level player and can really shoot the basketball,” Baker said. “I don’t know how much he’s going to play, but he’s here for the future.”

Jerotic missed time due to an injury during his sophomore season.

“When he’s slashing and rebounding and running the court he can play at a high level,” Baker said.

“He’s got that old man river type game,” said Baker of Adup. “He keeps getting stuff done. He’s a smart kid that plays within himself."

Iliya is athletic but needs to be more aggressive.

“He’s plays a lot more aggressive than last year,” Baker said. “As long as he does that he can help us.”