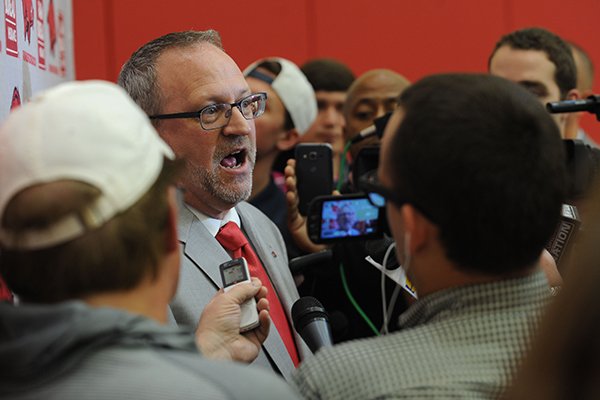 Arkansas women's basketball coach Mike Neighbors (left) speaks Tuesday, April 4, 2017, with members of the media during a ceremony and press conference to announce his hire at the university's basketball practice facility.

Morris, 6-2 of North Little Rock, has approximately 20 scholarship offers, but has narrowed her list down to the Razorbacks, Florida, Mississippi State, TCU and Oklahoma.

She will have several questions on her mind during her visit.

"Is this the right place for me?' Morris said. "Am I going to fit in here? How does the atmosphere feel? How does the team feel? Educational wise. Stuff like that."

Morris said she would be happy to represent her state should she decide to be a Razorback.

"This is the Natural State," Morris said. "Arkansas is unique in its own way. People try to talk down about Arkansas and look down at us and I just feel like if I do go to Arkansas in the future I would like to go and represent our Natural State."

Fimple said he believes Morris' personality can help attract other top talent to the school of her choice.

"One of those kids that's kind of like a magnet to other kids," Fimple said. "She'll be a good recruiter for wherever she ends up at. Kids are kind of drawn to her."

Doumbia, 5-9 of IMG Academy in Bradenton, Fla., moved to the United States in November of 2015 from Mali in Western Africa.

She attended an Elite camp in June and that got the wheels in motion for her return to Fayetteville for an official visit, according to her guardian Danny Doyle.

"Got several schools coming in trying to get that fifth visit," Doyle said. "I think USC, Tennessee, Georgia Tech are going to come in for an in-home to try and get the fifth visit."

"This is me speaking as an advisor in her life, what's going to help her the most once she's done playing basketball," Doyle said. "Obviously basketball is what she wants to do and she wants to play that until she no longer has the option to."

The Arkansas football team has had to adjust to not having the locker room in the Broyles complex for game day, as construction of the north end zone expansion continues, and it also forced how the Hogs entertain recruits.

Director of recruiting E.K. Franks and his staff utilized the Broyles complex for recruiting visits in the past.

"You have to limit your numbers because of the renovation," Franks said. "You don't have the normal facilities. Everybody is adjusting. so we have to in recruiting."

Franks can't name recruits, but said he's expecting 40 to 50 prospects to visit for the TCU game.

"Theres a lot of quality kids coming," Franks said. "A lot of offered kids and a good chunk of the committed kids."