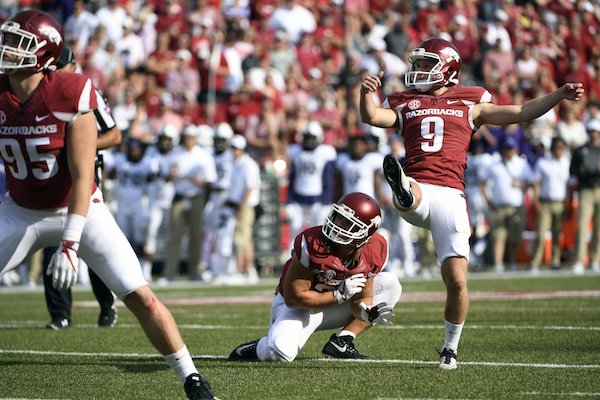 FAYETTEVILLE — Bret Bielema said he'd have to review the film from Arkansas' 28-7 loss to TCU in order to properly evaluate the performance of senior quarterback Austin Allen.

That wasn't the case for Cole Hedlund. The junior kicker missed two short field goals, one wide left from 23 yards out and the other from off the left upright from 20, in the defeat.

"To doink it with a perfect protection and perfect snap is unexcusable," Bielema said of the second miss. "So we definitely got to find the other option in that regards, because we're not going to go down that road again. That one we'll move forward on."

Bielema said Hedlund converted 95 percent of his kicks during fall camp and the first two weeks of practice this season. He is just 14 and 24 in his career.

He missed his first kick Saturday, the 23-yarder, from the left hash, reminiscent of the attempt he failed to convert at TCU a year ago and one that almost cost the Razorbacks when the Horned Frogs rallied from a 20-7 fourth quarter deficit in 2016.

The 23-yarder Saturday would've given Arkansas a 10-7 lead on the first play of the second quarter.

"We even talked about the first one if we wanted to back it up, but he felt very confident about the angle and the hit," Bielema said. "Those are hard to take."

The second miss was a 20-yarder from the center of the field on the second play of the fourth quarter, a kick that would've pulled the Razorbacks within 14-10. Instead, he hit the left upright and missed.

"The second one was basically a PAT and to miss that is juvenile," Bielema said. "We've got to do whatever we gotta to do to make sure that can be handled in the future."

"Connor Limpert has hit the ball well, though, so we wanted him to concentrate more on just his kickoffs and Mazza and Cole have been doing the PATs and field goals, but obviously something is going to have to change to get the answer right," Bielema said.