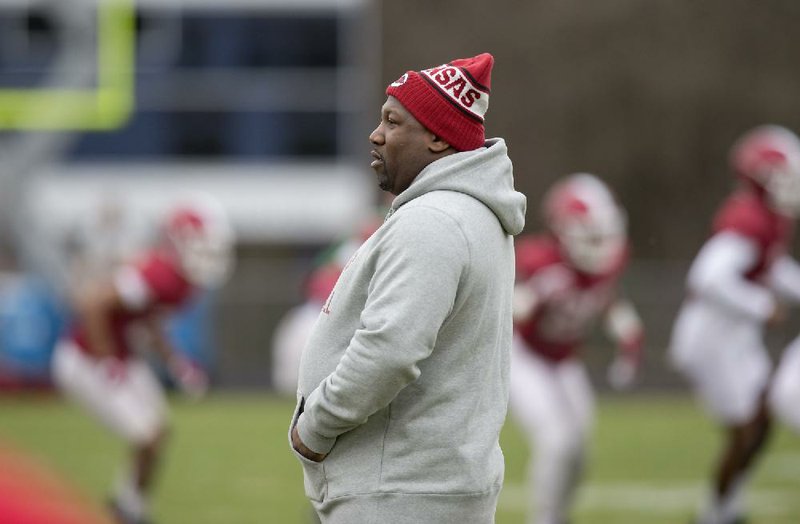 Hurricane Irma is complicating the Arkansas Razorbacks football coaches' plans to hit the road recruiting for the open date this week.

Irma is expected to hit south Florida this weekend and work its way up the state and into Georgia, two states the University of Arkansas, Fayetteville coaching staff planned to visit this week.

"They'll leave Sunday evening and be in schools Monday, and then they'll be at games Friday," director of recruiting E.K. Franks said. "Again, it depends on where we can get to in the first part of the week, we'll adjust what we can do at the end of the week."

Franks and the coaches will make adjustments on the fly after learning more about Irma's path.

"We kind of don't know the schedule yet due to the weather and the hurricanes around the country," Franks said. "We have drawn up no less than 10 different itineraries where to send the head coach and assistant coaches. The weather keeps changing, the predictions keep changing."

The Natural State will be the primary focus while also hitting surrounding states of Tennessee, Oklahoma, Louisiana and Texas.

"We would love to get into Florida and get into Georgia, but it looks like we might not be able to make it down that way," Franks said. "So we'll probably make our way to the West Coast and Colorado and that direction."

"If all goes well with him, we'll have him in nine different schools," Franks said.

"You're going to try and see all of the committed kids sometime this week," Franks said. "Again, the weather plays a big factor in that."

For the second year in a row, the Razorbacks have the majority of their recruiting class completed before the start of the season, but there are a few spots left.

The Hogs have a commitment from quarterback Ty Evans of Monument (Colo.) Palmer Ridge for the 2019 class. The coaches also will try and see underclassmen while on the road.

The aftermath of Hurricane Harvey also will keep the coaching staff out of the Houston area.

Bielema and his staff usually have the luxury of evaluating the film of the first three or four games of prospects before hitting the road during a bye week, but the early open date doesn't allow that.

"The beautiful thing about having a bye week late is you can actually watch a lot of the high school kids on film first and see what their senior film looks like before you go out," Franks said.

Franks said the staff is looking at the early bye week as a positive.

"We're looking at it as an advantage because we're going to be the first ones in the schools," Franks said. "We're going to look at the positive part of it."