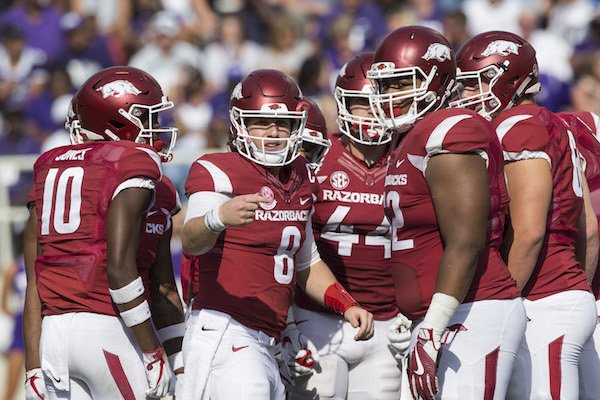 Quarterback Austin Allen looks toward the sideline as Arkansas takes on TCU Saturday, Sept. 9, 2017, during the game at Razorback Stadium in Fayetteville.

FAYETTEVILLE — Most college football players have Twitter or Instagram accounts, but the message from the Arkansas Razorbacks since losing 28-7 to TCU is that they’re not going to get caught up in the fans’ reactions on social media.

Their focus is on the message from Coach Bret Bielema and his assistants.

“I mean, we see it all,” quarterback Austin Allen said. “We hear what they’re saying. We can’t worry about what they think.

“It’s all about what this building thinks, what Coach B says and what the coaches say and how we work.”

“I don’t even look at it,” O’Grady said. “I choose not to because I don’t even believe in listening or letting that get to my head. Other people might, but as an individual I don’t even acknowledge it.”

Arkansas defensive coordinator Paul Rhoads said his unit’s preparation for Texas A&M is as much about the entirety of the Aggies’ offensive unit as it is about whether senior Jake Hubenak or freshman Kellen Mond will start at quarterback.

“You have to get ready for their offense,” Rhoads said. “Their offense is what it is and we’ve seen it here in the program year after year, and that’s what we have to get prepared for. Whether it’s that position, the left tackle position or the outside receiver position, we have to go defend that offense.”

“We’re actually much better than probably even going into the game week preparation for TCU,” he said. “We’ve got a number of guys back that are cleared for practice, which means they’ll get in great work this week and next week at full game speed.

“We haven’t been that way, especially on the offensive side of the ball. Obviously, we always try to withhold information that might be damaging to us in game preparation. You know, we just haven’t been able to practice at full speed on offense the way that we want to. We’re going to be able to do that moving forward. So that’s big.”

Bret Bielema was asked Wednesday who would handle place-kicking duties if the Razorbacks had a game on Saturday.

“It would be whoever does the best in the next two weeks,” Bielema said.

Connor Limpert and Blake Mazza — neither of whom have attempted a field goal or extra point — are competing for the job after Cole Hedlund missed from 23 and 20 yards against TCU.

Bielema said he scripted six field goals at the beginning of practice and six more at the end for Limpert and Mazza with the first team. He said Hedlund would work with the second team.

“It will be a two-week competition,” Bielema said. “Whoever has the best numbers at that time will be the one who kicks against A&M.”

Bielema said he has talked to Hedlund.

“I brought Cole in on Sunday and checked on his personal well-being and had a conversation with him about where we’re at, where we stood and what we’re going to do moving forward,” Bielema said. “I asked if he was doing OK. I think everything is under control in that regard, but he’s the one who has to live it, go through it.”

“I think recruits pay a lot less attention to wins and losses than maybe is given credit to that. I’ll go back to being a head coach in a rivalry game,” said Rhoads, who coached for Iowa State against Iowa. “Just as many times we got the kid when we lost and potentially lost the kid when we won.

“I think it’s the overall body of work that you do in the process of recruiting that matters most. Otherwise, kids would be de-committing on a weekly basis.”

“T.J. is an explosive guy,” Enos said. “We need to get him in one spot permanently. There’s a lot on his plate, but we need him to be a real consistent wide receiver right now.

“We’re going to get him opportunities during this bye week and next week to step up and get a bigger role as a wide receiver. We need his explosiveness out there. T.J. will figure in. He has to just keep practicing hard and doing things right. I think he’ll see the ball a lot before the season is over.”

Sophomore tight end Austin Cantrell had a rough outing against TCU. In addition to a would-be touchdown throw on which he had unknowingly drifted out of bounds on the first play of the fourth quarter, Cantrell was involved in a couple of costly penalties.

On a third-and-4 play from the TCU 44 in the second quarter, Austin Allen completed a 4-yard pass to Jordan Jones and also received a late hit from a TCU defender. However, the play was nullified as Cantrell was flagged for offensive pass interference as he contacted a Horned Frog defender on a rub route.

In the fourth quarter with Arkansas facing a second and 10, Cantrell was called for holding on a David Williams run, creating a second and 20. The Razorbacks wound up punting to the TCU 45, setting up a touchdown series that put the Horned Frogs ahead 21-7.

“I’m there to give both those guys a break,” Morgan said. “I’ll get in and just make the plays I can.”

Morgan said he’s comfortable playing at the weak-side spot for Greenlaw or in the middle for Harris.

“I like the Will linebacker … but I can do either one,” Morgan said. “Whichever one they need, I can just go in.”

Morgan said he graded 81 percent against TCU. He had three tackles, including one for a 1-yard loss.

“I personally think I could have made a couple more tackles, but I think I did good,” he said. “I can always get better and I need to do that during this bye week.”

Morgan joked he sometimes has to remind himself which spot he’s playing when he goes into the game.

“It’s kind of instinctive because I’ve been doing this since the spring,” he said. “I’ve been able to rotate in without any problems.”

Teams normally don’t like to have an open date after just two games, but the Razorbacks hope it will be a plus to have some extra time to prepare for their SEC opener against Texas A&M.

“The preparation is going to help a lot,” linebacker Dre Greenlaw said. “Getting that edge on Texas A&M. Making sure everybody knows exactly what they’re doing. I think that’s going to help us a lot as far as mentally. Then physically the break is going to help us be able to rest a couple guys that were either a little banged up before the season started or got nicked up in the last two games.”

Arkansas has played eight true freshmen and those players, Greenlaw said, will especially be helped by an extra week of practice.

“We’ve got a lot of freshmen that can play,” he said. “So hopefully with this bye week we’ll be able to put some of those freshmen out there and they can show us what they can do and help contribute on Saturdays.”

The Razorbacks are 9-4 under Bret Bielema when having more than two weeks to prepare for a game. The record includes season openers, bowl games and games following open dates.