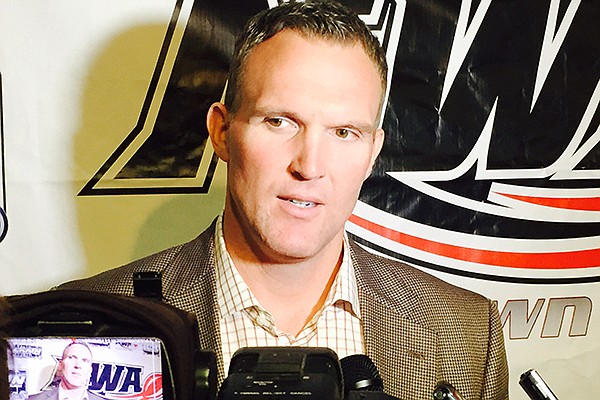 FAYETTEVILLE — Fans can say some brutal things to players at all levels of football.

The worst Matt Stinchcomb heard was by an Oakland security guard during his NFL career with the Raiders.

It was an appropriate story when Stinchcomb spoke at the Northwest Arkansas Touchdown Club on Wednesday. It was the SEC Network announcer's first brush with anyone affiliated with the Arkansas football program.

“When I was at Georgia, we didn't have a crossover game against Arkansas,” he said. “I didn't really know much about Arkansas until I was drafted by the Raiders in '99.”

It was a bitter memory. Former Razorback pass rush specialist Raylee Johnson, a veteran by that time with the Chargers, lit up the Oakland left tackle for a series of quarterback sacks and pressures.

“I came to the sideline late in the game and the security guard asked to see me driver's license,” Stinchcomb said.

Obviously, there wasn't one. The guard said, “I just wanted to see if you are under 18, because what 99 is doing to you would qualify as child abuse.”

Stinchcomb said he thought later it might have been good to have gone to Johnson after the game to touch his jersey.

“That's the only way I would have known what it felt like,” he said. “I was never close enough to him in the game.”

Defensive line play is still pretty good in the SEC. It's what makes the league stand out, according to Stinchcomb. He's partial to offensive linemen and watches them closely, but they don't measure up to what is on the other side of the ball throughout the league.

The other unit in the SEC that was playing good at the end of last year was Kentucky.

“They were pretty good,” he said. “It was one of their better units there.”

Stinchcomb said he once watched offensive line play more closely during games, but he focuses more “on perimeter play because of the way ball has changed.”

The NCAA rules that allow linemen to block down field three yards past the line changes some of the thoughts on how to watch a game.

“You could once just watch the guards and they would tell you what's happening,” he said. “It just is so different now because they block run on pass plays. They will give you a false key. The read option makes it a different game.

“I might get to watch offensive line play in tape study more than live in game study. I might watch one play for five minutes in tape study. I want to see that end zone look.”

Offensive line play is still a big key to who is going to win a game. He thinks it will determine the Arkansas-Texas A&M game on Saturday.

“The thing about offensive line play, it's not about who has two playing good, or three or even four,” he said. “It's who has the best five-man unit. One guy messing up can determine everything.

“I know Texas A&M has really struggled with finding a unit. I was at their game last week and they played six different sets of linemen during the game. That's a lot. They had a tough time getting their back to the line of scrimmage.

“I think Arkansas has made some strides and can run the ball against Texas A&M. The best part of the A&M defense is their tackles. But they are compromised at defensive end because of graduation and I believe Arkansas can run the ball.”

Stinchcomb did not pick a winner, but he did make one prediction.

One of the unknowns in the game might be Arkansas tailback Chase Hayden, a true freshman who got only two carries against TCU after a 137-yard performance in the opening game against Florida A&M. His lack of experience in pass protection kept him off the field.

“He's phenomenal,” Stinchcomb said. “One of the questions will be if A&M's pressures are exotic enough to keep him off the field. But the bye week might have helped Hayden.”

Stinchcomb did toss around some jokes in his time with the NWA Touchdown Club. He was not kidding when he mentioned that new Dallas Cowboys-look-alike jerseys won't help the Razorbacks.

“Those are not worth one point,” he said.

That came from a man who is still trying to figure out what Raylee Johnson's jersey with the Chargers felt like.