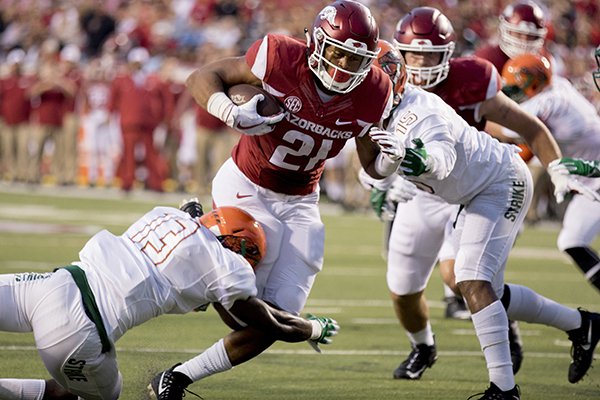 Sophomore running back Devwah Whaley will play against Texas A&M on Saturday after suffering a minor injury during a "disagreement" with receiver Brandon Martin earlier in the week.

"He's ready to play," Bielema said of Whaley, the starter for the Hogs.

"How many times are 21-year-olds in an disagreement? Devwah is excited to play in the game in his home state."

Bielema said Martin, a sophomore, was already ruled out of the travel squad because of a lingering hamstring injury suffered two weeks ago.

Those comments came in the second part of the opening segment of Bielema's radio show, after he discussed the decision to wear Dallas Cowboys-themed game jerseys.

"It happened much quicker," Bielema said, noting the team is excited about the change in uniforms.

Bielema said the team is much healthier than before the TCU game. Wide receiver Jared Cornelius appears in better condition.

"He's lost 10 to 12 pounds," Bielema said. "Jared took personal inventory after the TCU game. If you don't practice it's hard to play. He sent me a text after the game. He's like a different cat out there now. He's a different human being on the field."